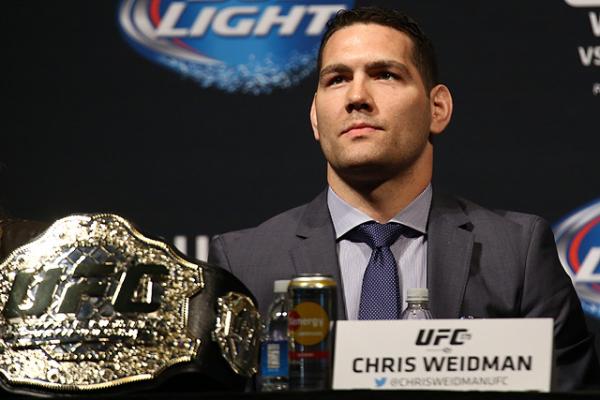 Jon Jones (21-1) may currently be out of actual due to serving an indefinite suspension while awaiting resolution for the felony hit-and-run that led to him being stripped of light heavyweight title, but Chris Weidman hasn’t forgotten about the former face of UFC.

The 28-year-old Jones was arrested on April 27 after allegedly running a red light in a rented SUV and striking a car driven by a pregnant woman in Albuquerque. Jones allegedly fled the scene on foot. But Weidman expects to meet Jon again, possible in the octagon.

A superfight against Jones is one that Weidman has dreamed about for several years, infamously offering to move up a weight class and step in on two week’s notice against Jones once Dan Henderson dropped out of UFC 151 in 2012.

Unfortunately for fans the fight never materialized and Jones ended up defending his light heavyweight belt against Vitor Belfort, but Weidman still see’s that fight in his future.

“That’s nothing against Jon,” Weidman said. “It’s just because I’m a competitor. I want to fight the best possible people. I want to have the biggest challenges in front of me and conquer them.

“That’s why I wanted to fight Anderson Silva when nobody else wanted to fight him. I want the biggest challenges. I want to beat people who people think I can’t beat. And Jon is definitely going to be one of those guys.”

For now though Weidman (13-0) is set to defend his UFC middleweight title against Luke Rockhold on December. 12 at UFC 194