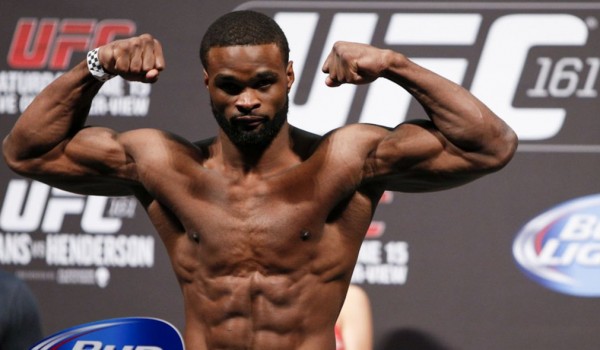 As a former Strikeforce figher, Tyron Woodley was lucky enough to witness 2 of women’s MMA biggest names rise to prominence. Ronda Rousey and Cristiane ‘Cyborg’ Justino, were impressive champions at a time when women were not allowed to compete in the UFC. Now, Rousey has elevated the sport to a new level, unfortunately for ‘Cyborg‘ there isn’t a UFC division for her yet but the rumours of her dropping down weight to fight Ronda never seem to end. If it happens, Rousey vs. Cyborg has all the makings of a pay-per-view blockbuster and certainly the biggest Womens MMA fight yet.

Woodley is just as intrigued by Rousey’s rise to prominence and the growth of women’s MMA as any fan might be.

“I got a chance to watch Ronda come up; I got a chance to watch ‘Cyborg’ destroy many women. I think it’s great we’re even having this conversation right now,” Woodley said during a recent appearance on Sherdog Radio Network’s “Beatdown” show. “…I’m in the airport and I see 50-year-old women looking at this Ronda Rousey clip on her phone. I hear people talking about it. I was just sitting there. People didn’t even know who I was, and I just hear them talking about Ronda Rousey’s last fight.”

However, the UFC welterweight may not agree with the general option that this will be the hardest fight for both women, especially if Rousey keeps going the way she has been.

“We’re not gonna see this fight happen for six months at least. And what happens is, if Cyborg makes the weight she’s gonna come down and lose the power, some of the things that make her who she is,” Woodley said. “Also, you’re gonna give Ronda Rousey six more months to get better. We haven’t even seen all of her training displayed in the Octagon because nobody can last a minute. I think the if it’s Cyborg we saw in Strikeforce [against] to the Ronda Rousey we saw [at UFC 190], it is a competitive fight. “Now we’re seeing the Cyborg clear of any performance enhancing drugs, she would have to cut all the way down in weight, by the time that happens… we’re going to continue to see Rousey develop for another six to eight months, maybe a year,” he continued. “I don’t think it’s as competitive as people think it will be.”

Woodley uses himself as an example to explain why Rousey might be reluctant to move up in weight.

“It’s like comparing me to Chris Weidman,” he said. “No way in hell are you gonna watch me walk in there and be competitive with Chris Weidman or any of those killers at 185.”