UFC straweigh fighter Angela Hill appeared on the MMA hour and told Ariel Helwani she  believes there are the women’s strawweight fighters there to be legitimate fighters and others there to attract viewers due to their looks. 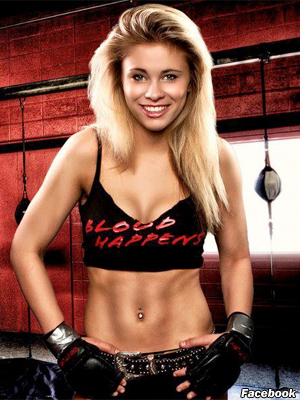 “Look at VanZant. She headlined maybe two or three events. And she’s lost to the same people that I’ve lost to. It’s strange that you would keep headlining someone unless that was going on. There’s two different types. They’re bringing in one to bring the eyes in, but then the other to still look like a legitimate weight class.”

“I think I can float between both,” Hill said with a laugh. “I think I’m pretty cute, too. But you know, I’m gonna get the tougher fights as opposed to someone like VanZant, someone like Curran, the people that are there to just bring in eyes and make the sport popular by saying, ‘Oh look, she’s cute and she’s a fighter, too — you’d never guess!’”

Hill who is making her return to the promotion at UFC Fight Night: Bermudez vs. Korean Zombie on Saturday in Houston is fighting Jessica Andrade in an exciting cross promotional fight.

Hill has been on a tear since being released from the UFC in 2015, winning all four of her Invicta outings in convincing fashion.

Andrade has been reinvigorated by her move to 115 pounds, finishing both Jessica Penne and Joanne Calderwood and a win here could put her next in line for a shot at champion Joanna Jedrzejczyk.