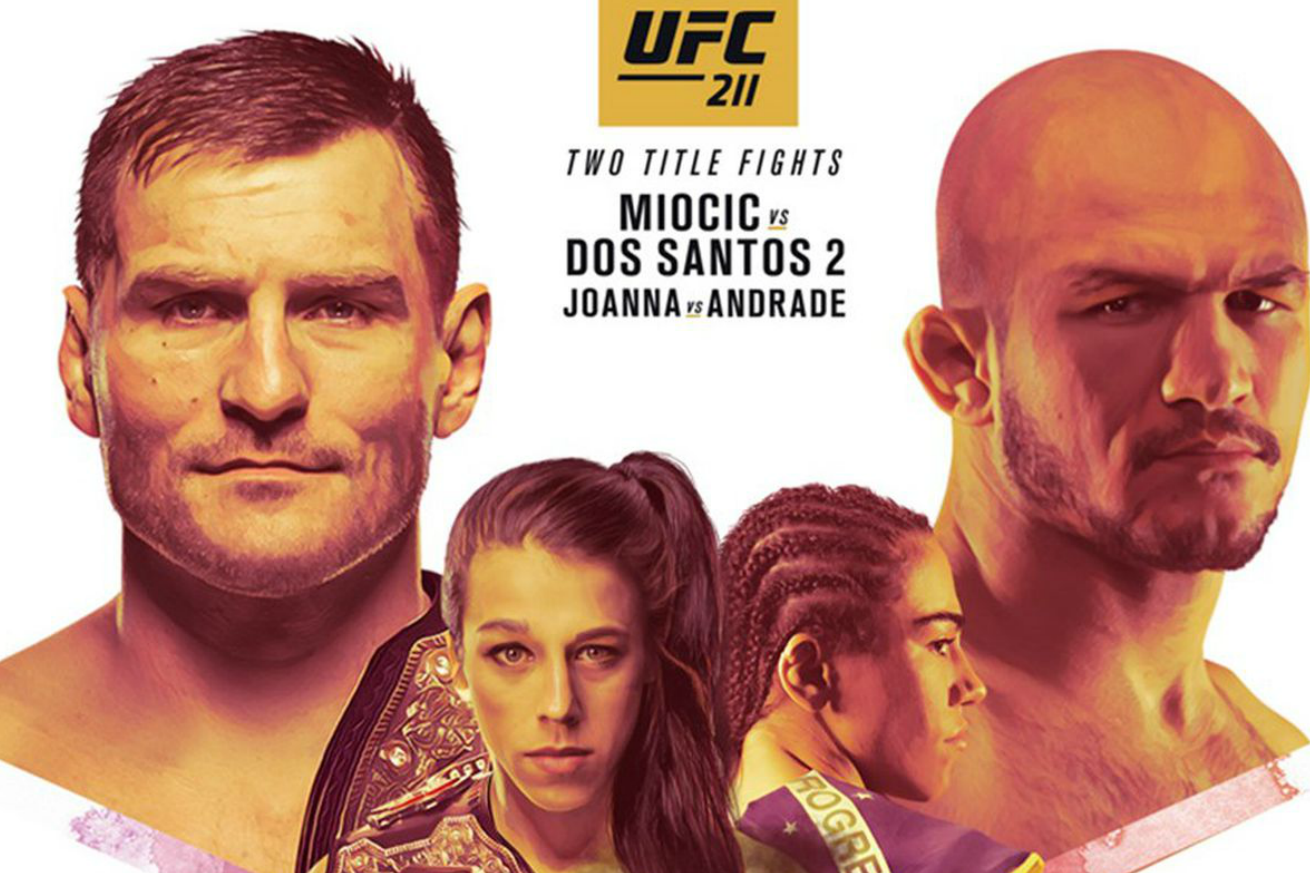 An Idiots Predictions for UFC 211

Living up to the self-titled ‘idiot’ name, I correctly selected 1 out of 5 picks for UFC 210. But, like a young Frankie Edgar, I shall rise from this first knockdown and continue to blindly swing for the rafters… if I get knocked down again, I shall rise once more… even if I get knocked down a third time, I shall come back and win a decision, cuz I got HART. Just to recap, these picks aren’t based on deep analysis, statistics or even sanity, these are picks based on jovial ideas from a fan who loves the idea of the improbable.

UFC 211 is the first blow-your-socks-off card of 2017. UFC 209 was threatening to blow my socks off, subsequent events made sure not only did my socks stay on, but over the course of the main event I actually reapplied all my clothing until I was fully dressed… something I find to be completely unnecessary during my UFC downtime (creep). Headlined by Heavyweight champ Miocic, the card takes place in his hometown Clev….Dallas, the card takes place in Dallas.  So lets make like funny twins and get twowit… lord that is bad…

Replacing Sergio ‘Showtime….s younger brother’ Pettis and Henry ‘Olympic Bear’ Cejudo are two of the WORLD’S BEST above average middleweights. Of all the above average middleweights out there, these two are the most relatively in-form, kind of exciting and slightly dangerous of them all. How about this for a stat, Jotko comes into the fight with a 58% decision win rate, Branch coming into the fight with a 40% decision win rate, meaning there is only a 2% chance that this will end any other way (failed hard in Maths class). What a Jotker.

The Rocky Balboa of the MMA world goes up against the human Beyblade in this awesomely even match-up. Fresh from dicing BJ Penn up like pineapple on a Hawaiian Pizza, Rodríguez is looking for the scalp of a man that just don’t quit, and that is why I can see this going the full three rounds with Rodríguez winning the split decision after a rousing Edgar comeback in the third round, facing Max Holloway for the featherweight title later this year! #NEWBLOOD

It must be hard for Demain Maia getting through life as a boa-constrictor, slithering your way in and out of peoples lives, never really connecting with anyone because you are a snake and your main objective is to suffocate people, still, it makes for a successful MMA career. Jorge Masvidal hasn’t had it easy either though, he has quite literally fought his way through every moment in his life, car needs an MOT? Backyard brawl. Wrong order at Starbucks? Frontyard fight. It’s all on YouTube (if not slightly embellished), Masvidal is the most game man of all men. I have absolutely no reason to believe this will go down any different to the Maia vs Condit fight. And yet… Jorge for the win, gotta respect that.

Oh my days writing Joanna’s name is hard, you are genuinely copying it letter to letter from google and you are still convinced it is wrong, the only thing more terrifying than pronouncing her name must be the idea of being peppered by her savagely pointy elbows over the course of 5 rounds. Not one to be outdone in the category of hard to pronounce names, Jessica ‘There is a silent G in my name but where?’ Andrade has got a tiny, deadly, Polish mountain to climb on Saturday. Joanna receives the curse of death, my backing, surely I’ve got this one right? Right?

The heavyweight belt has been held onto for about as much time as I can hold onto my dignity on a Saturday night…a second…title defence for Stipe would equal the record (sentence artistry if I don’t say so myself). JDS is a man that loves to participate in a war, Miocic has something equivalent to a Hydrogen bomb in that right glove. Can JDS avoid the shot and take Miocic into uncomfortable later round territory? If the Junior that I love turns up I see him getting it done and keeping the Heavyweight Championship merry-go-round turning.