Wisconsin is home to many excellent fighters such as Anthony Pettis. In today’s episode of Across The Pond, you will a gritty submission artist ready to declare war on the UFC‘S Welterweight division. A professional since May 2012 and representing Pura Vida BJJ & MMA, 30 year old Zak Ottow owns a 15-4 record in nineteen career bouts consisting of ten submissions, two knockouts and  three decisions. 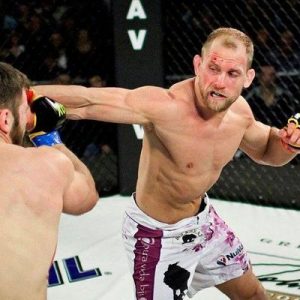 At King Of The Cage New Vision he defeated Jim Klimczyk. Then, Zak submitted Ricky Stettner. Ottow defeated Jessie Midas via TKO in the first round. He submitted his next three opponents which included victories over Matt Gauthier and Quinton McCottrell respectively. At RFA 19, Zak submitted Nathan Howe via arm triangle choke in the second round. He also tapped out Eddie Larrea. Zak defeated Robbie Gotreau via TKO in the first round. Ottow submitted Richard Wolfe in round one via guillotine choke. He also submitted Jay Ellis and Frank Schuman respectively. Zak defeated Craig Eckelberg via unanimous decision. At UFN 96 in Portland, Oregon, he defeated Joshua Burkman via split decision. At UFN 110 in New Zealand Zak defeated Japan’s Kiichi Kunimoto via split decision. ”The Barbarian” is on the warpath so stand clear and get out of the way!

The Pride of Scotland