What is next for the UFC 224 main card winners?

This weekend the UFC returned to Rio de Janeiro, Brazil for UFC 224.  Headlined by women’s bantamweight queen Amanda ‘The Lioness’ Nunes VS Raquel ‘Rocky’ Pennington.  Whilst the main card was stacked, with some of the biggest Brazilian mix martial artists the sport has to offer.   Throughout this article, we will be looking at what is next for the winners from UFC 224 main card. 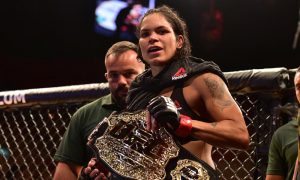 Amanda Nunes defended her belt for a 3rd consecutive title defence against a very game Raquel Pennington Saturday Night.  Unfortunately for the American, ‘The Lioness’ was too much for her.  Defeating her in round 5 by TKO victory.  It opens the question what is next for Nunes?  Before the announcement of the Pennington fight for UFC 224, there was rumours of a women’s super fight between Nunes and featherweight champion Cris Cyborg at featherweight.  Nunes has not hidden away from the fight, wanting to face her fellow countrywomen.  Wanting to become the UFC‘s first women’s two-weight world champion. Additionally UFC president Dana White agreed that the fight between Nunes and Cyborg should happen a couple of months ago.  It’s looking more likely that the two Brazilian Queen’s will be facing off later this year. 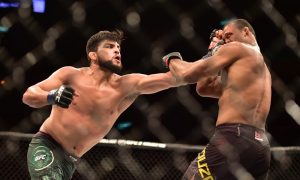 Kelvin Gastelum picked up a split decision win over former Strikeforce Middleweight Champion Jacare Souza.  It could of been all over for Souza in the first round after he was dropped by Gastelum.  However, he recovered and battled back in a close fight that went the distance.  During his octagon interview, Gastelum was asked who he wanted next, his answer was a fight for the belt.  It looking likely that Gastelum will be booked to fight the winner of Whittaker VS Romero 2.  Souza was the UFC number 2 ranked middleweight in the world.  After defeating Souza the next step is a fight for the title for Gastelum.  With Gastelum eyeing the title shot at the Madison Square Garden card later this year. 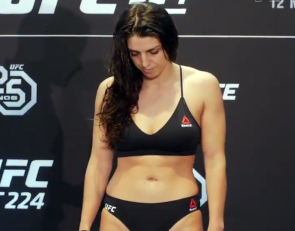 The question surrounding Mackenzie Dern is not who she fights next but what weight class she competes at next.  For Dern’s strawweight bout she weighed in 7 pounds over the strawweight limit.  Receiving a mass amount of criticism from the MMA public and even being called a ‘cheater’ by UFC bantamweight and commentator Dominick Cruz.  This was the 3rd time Dern has missed weight in her career.

It looks likely that the BJJ world champion may be forced to compete her next bout in the newly formed UFC flyweight division.  The flyweight division is still evolving and developing and like the women’s featherweight is still not fully formed.  A fight against the Ultimate Fighter Finale runner-up Roxanne “The Happy Warrior” Modaferri could be an interesting bout for Dern.  Modaferri is a pioneer of women’s MMA and is coming off a high-profile fight in the finale of the Ultimate Fighter despite losing.  She contains a strong ground game to challenge Dern on the floor.  The Happy Warrior is also the number 5 ranked flyweight in the UFC.  Giving Dern the opportunity to break into the UFC rankings.

Whatever is to be for Mackenzie Dern in the future, there is one thing that should be certain.  Dern should compete in the flyweight division.  She proved on Friday night she is a liability for the strawweight division. 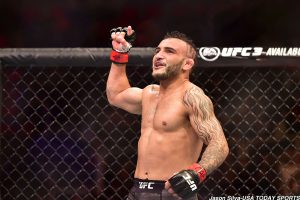 The always exciting, hard-hitting and entertaining John Lineker scored a knockout victory over Brian Kelleher on Saturday night.  Lineker finds himself in a situation of uncertainty in the bantamweight division. With the men ranked ahead of him all having bouts scheduled.  Except for the ex-champion Dominick Cruz, who broke his arm last year.  One option for Lineker is waiting to face the winner of the Moraes VS Rivera fight scheduled for June 1st.  Whilst another credible option is a bout against New York native Aljamain Sterling who recently picked up a victory over Brett Johns in Atlantic City.  Another win against a top opponent would give Lineker a three-fight win streak and a credible claim for a shot at the bantamweight championship. 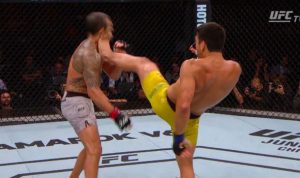 Lyoto Machida on Saturday night ruined the retirement party for Vitor Belfort.  Landing an absolutely devastating front kick onto the chin of The Phenom and potentially delivering the knockout of 2018 so far.  The Dragon after the fight made no secret of who he wanted next.  After retiring Belfort he wanted to add another former champion to the list.  Michael ‘The Count’ Bisping.

Bisping is a popular name on a lot of fighters lips these days.  With many fighters wanting to be involved in Bisping’s last dance within the octagon.  However, a fight with Machida makes sense.  Two fighters who have a long history in the sport.  Both former champions who are both able to draw attention.  The Dragon due to his exciting and unique fighting style and Bisping who is able to get under the skin of even the most tough-shelled individuals.  Whilst the two men are roughly at the same point of their careers.  Pioneers in the sports and both on their way out of the game.  This is a match-up that won’t be possible in a years time and a great way to see a Legend VS Legend showdown.