In part two of our interview with Josh Gross, we continue discussing the impact of Ali vs. Inoki, and also the perception of Ali vs. Inoki since the release of his book. Also, we discuss MMA’s ties to professional wrestling, Ronda Rousey’s legacy in the UFC, and Ronda’s transition to WWE.

Through your time researching and writing the book, would you say the most surprising stories came from learning about Antonio Inoki?

I think I learned interesting things from all corners, but Antonio Inoki was extremely interesting to write about. His history, his connection to Rikidozan, who is the forefather of Japanese pro wrestling. I must say as someone who is not a pro wrestling aficionado, someone who does not watch it today, I developed an understanding and appreciation for what pro wrestling is and represents in society and culture. And why it continues to be something that persists and attracts a lot of attention.

I may have been too dismissive of the relationship between combat sports and professional wrestling in the past, but I learned quite a lot about the important connection that binds these things together. And much of that was due to what Antonio Inoki’s heritage was. What he hoped to accomplish through pro wrestling, what his idea of pro wrestling was, and how we see that now with what mixed martial arts is.

You still see people talk down the relationship between combat sports and wrestling, but it’s undeniable how connected they are.

I think they get it, but I think it’s just the distaste, it doesn’t work for them. I think it’s okay to be put off by something like what happened with Brock Lesnar, Daniel Cormier, and Stipe Miocic. Not because it’s an invasion of pro wrestling, but because there’s no reason for this man Brock Lesnar to come in and degrade him (Stipe Miocic). That feels like an un-martial arts idea. It’s okay to want mixed martial arts to be different to pro wrestling. They are separate things.

I think the more the lines are blurred, the more difficult it is for some fans to cope with that. There’s a constant conversation about mixed martial arts and what people want, and for me, the value of what mixed martial arts is decreases the more you embrace theatrics, and the less the sporting aspect of the sport means. I don’t watch mixed martial arts to be entertained or to see people talk trash to one another. I watch it because I want to see who the best hand to hand combat athlete in the world is.

So to see those things sometimes cast aside because it’s an easier hit to have people screaming at one another, pushing and shoving, and it’s a wink-wink scenario. That works for some people, but it doesn’t work for me, and I’m sure I am not alone there.

I am not sure if you’ve seen much of Ronda Rousey in WWE, but she’s really setting the wrestling world on fire. How much do you think MMA fans actually care about her WWE career and do you think they are secretly watching what she does in WWE?

I’m sure they are because she’s a massive personality, and people will pay attention to her. I’m aware of it because I’m on Twitter, and I don’t want to avoid knowing what’s going on with Ronda Rousey, but I don’t care.  It’s the same with Brock Lesnar. I don’t care what he’s doing in the WWE. If one day she pulls a Brock Lesnar and returns to the UFC, then I’ll pay attention.

I’m sure I’m in the minority in terms of the people that are interested in her and what she’s doing, and clearly, she has had a lot of success. She has been groomed for this from the start, and almost more than her mixed martial arts days. She grew up with Gene Lebell, someone who was influential in pro wrestling and probably does not get enough credit for his pro wrestling influence. He was a mentor to her, and he was the referee in the Ali/Inoki contest.

I don’t think it’s surprising to people that are around her that she ended up in the WWE world, and I don’t think it should be surprising to anybody that she’s doing very well. She’s a very significant athlete, very skilled, and people seem to be really enamoured by what she does or doesn’t. And if it hasn’t already, I’m sure it’s going to influence the way women in WWE are looked at and treated because Ronda carries that kind of gravitas to compel people to care.

When Ronda lost to Holly Holm, people jumped on her failure. It’s even at a point now where they try to diminish what she did and the impact she had on MMA. How do you look at her career and impact in MMA?

She was hugely influential for mixed martial arts, and she was a tremendous fighter. Anybody who takes away anything she accomplished is being unfair to her. I would say she set herself up more than anyone in her fall from grace. The way she carried herself towards the end of her run with the media, the way she reacted towards Holly Holm before the fight, I think all of this had a lot to do with how people reacted to her.

The way I felt about it at the time was this is an athlete who is unbeaten, looks untouchable, and she gets wiped away. And any athlete in that position will face blowback and criticism. But compound that with the fact that she had celebrity status. She wasn’t Kim Kardashian, but a lot of people knew who Ronda Rousey was. They only knew her as this dominant creature, and for her to face the fact she is not that, and not react well to it. I think all of that had an impact on how people viewed her moving forward.

Her departure from the UFC put a capstone on the idea that she couldn’t hand it, she ran away. It was contrary to Conor who owned up to his loss against Nate Diaz. I don’t begrudge Ronda for the way that she handled it. My sense is that she was burned out, competitively. She was mentally fried as a competitor. She had been doing it at the highest level since she was fifteen/sixteen in Judo, trying to become an Olympian. All the ups and downs she faced, at a certain point, she just had enough. 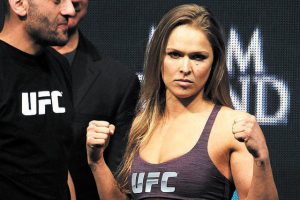 Now people even question her title reign by saying she did not beat any high-level competition.

That’s just silly; she beat everybody they put in front of her. The only question for Ronda was if she would ever fight Cyborg, and I don’t want to say she was protected from Cyborg, though some people thought that. It was a fight I wanted to see, but after the Holm and Nunes fight, most people will agree it would have gone badly for Ronda. But otherwise, she beat some really tough women.

Have you felt a shift in people’s perception of Ali vs. Inoki since you released the book? Do you think people understand how much it’s impacted Wrestling and MMA today?

I think people, who have read the book; I’m sure they have a better understanding of the history of it. A lot of the events that have happened since including Conor McGregor referencing Ali/Inoki in the Mayweather contest have added to the awareness of it, and the understanding of it in some respect.

My sense is that people are getting that mixed martial arts and professional wrestling are connected. You can’t separate the two, and the history is also worth understanding. The history also had a direct impact on the sport that we see today. I think all those ideas are becoming ingrained in the supporters that watch MMA on a regular basis. Whether they like the idea or not, I think the fact they are aware of it is a good thing.

We’ll see in time which path MMA goes down, whether they continue to favour the entertainment side. I hope not because I think it will take away from what makes MMA a meaningful sport over the long haul. We’re only twenty-five years into it, and there’s a long story to tell still.