The UFC have today announced the unveiling of its new UFC Legacy Championship Belt to mark a new era for the company. 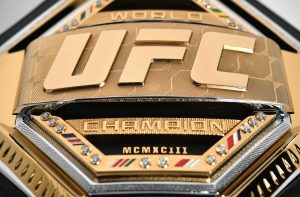 The UFC Legacy Championship Belt will be awarded for the first time to the winner of the main event superfight between UFC flyweight champion Henry Cejudo and UFC bantamweight champion TJ Dillashaw at UFC FIGHT NIGHT: CEJUDO vs. DILLASHAW, which takes place this Saturday, January 19, at Barclays Center in Brooklyn, New York. “This Saturday begins a new era for UFC, and it’s a perfect time to unveil our new UFC Legacy Championship Belt,” UFC President Dana White said. “The belt honors UFC’s past, while recognizing the amazing accomplishments of our current champions.” 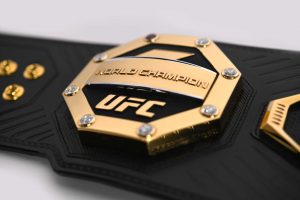 The UFC Legacy Championship Belt, a design collaboration between UFC, belt designer Brad Flaherty, and Jae El manufacturing, measures 50 inches in length and 12 inches in height, with an overall weight of 10.45 lbs. Made from genuine leather, the belt has a custom Octagon pattern embossed on its trim with gold Octagon-shaped snaps that include UFC’s logo.
The belt’s main plate is highlighted by the UFC logo. Made from high-polished gold, the logo is centered on a pattern comprising squares and octagons. The octagon contains 25 lines that represent UFC’s silver anniversary, which it celebrated in 2018. Each square has eight lines that represent the eight sides of the Octagon. The belt’s flag iconography is highlighted throughout the design as a way to honor the first eight countries to have a UFC champion:

The belt’s left-side plate will recognize the titleholder’s name and weight class, with their native country showcased with flag 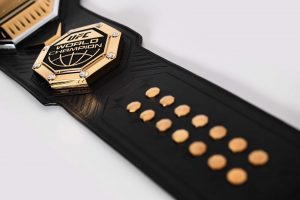 iconography. Eight stones border the plate, and for each victory in a championship bout, one of the stones will be replaced with a red ruby. The date and location of the win will be engraved adjacent to the stone. If an athlete successfully defends their belt more than eight times, red stones will be added to the right-side plate to continually acknowledge the accomplishment. The belt’s right-side plate is adorned by a gold UFC World Champion logo and bordered by eight stones. UFC’s jewelry partner, Bixler, will donate all stones and engravings.

The women’s championship belt will be identical in every detail, except for size and weight. Athletes who win titles across multiple weight classes will be awarded one belt per division. 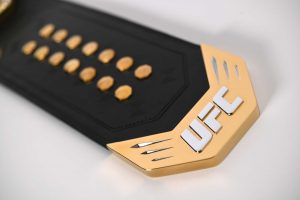