Fighters At A Glance: Conor McGregor

Conor McGregor AKA Mystic Mac isn’t everyone’s cup of tea but if you are a McGregor fan or someone that doesn’t know much about him this is the article for you! So today we are going to be looking at Conor McGregor‘s UFC career.

‘The Notorious’ one Conor McGregor AKA Mystic Mac is an Irish born fighter with a pro fighting record of twenty-one wins and only four losses. Conor debuted in the UFC way back in 2013 fighting against Marcus Brimage whom he knocked out in the first round. Then in his last fight of 2013, he had a fight with Max Holloway which went the distance and in this fight, McGregor is one of the few people to have bested Holloway in a fight. 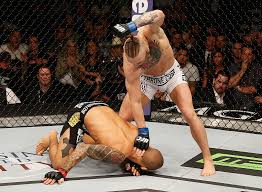 McGregor began 2015 with a fight with Dennis Siver in January. This fight ended again with McGregor winning by knockout but in the second round. Then came the biggest fight of Conors’ career back then he was set to fight then-current UFC Featherweight Jose Aldo they did a number of press conferences across the world but last Aldo had to pull out due to injury. Then stepped up Chad Mendes to be Aldo’s replacement and the fight was changed to an Interim Featherweight Title fight. Mcgregor bested Mendes in this one but it wasn’t as straight forward as he would have liked as Mendes dominated a lot of the ground game but McGregor did end up knocking him in the last seconds of the second round.

McGregor’s title fight with Aldo finally came to place in December of 2015 with Conor scoring probably the most famous title knockout in UFC history ko’ing Aldo in 13 seconds. 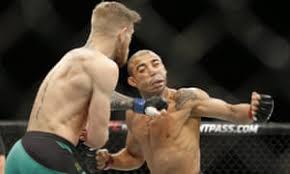 Then in March 2016 one of the most memorable UFC feuds began with Conor Mcgregor fighting Nate Diaz. During this fight, Conor suffered his first-ever loss in the UFC after being submitted by Nate in the second round. McGregor after the fight provisionally announced his retirement before fighting Diaz again and beating him after a 5 round war which many regards the best fight in UFC history.

Then McGregor did the unthinkable in November 2016 and defeated UFC Lightweight Champion Eddie Alvarez becoming the first fighter in UFC history to hold 2 titles in separate weight divisions simultaneously. Conor then took an almost 2 years absence from the UFC but during that time he boxed the GOAT of boxing Floyd Mayweather and went 10 rounds with him before being TKO’d.

Then in 2018 it seemed a long and nasty feud between Conor and Lightweight champion Khabib Nurmagomedov this fight ended in McGregor being completely dominated in the wrestling aspect of the fight, before being submitted in the 4th round and that seemed to put an end to the feud.

Conor is due to fight Donald Cerrone in January 2020 at UFC 246. If McGregor is victorious will we see Conor have another shot at a UFC title? Only time will tell…