UFC 2: No Way Out was the second mixed martial arts event held by the Ultimate Fighting Championship which took place on March 11, 1994. The event like the first was held in Denver, Colorado this time at the Mammoth Gardens and had an attendance of 2,000 fans.

This event kept with the tournament format but only this time it was a sixteen man tournament rather than an eight man tournament and the winner would receive $60,000! This event would again have no referees, no rounds and no judges and the only way to victory was a knockout, submission or a corner throwing in the towel. This event also marked the first appearance of the now long time legendary referee Big John McCarthy. When the broadcast begun this event had already been through the majority of the first round and the final bout of the first round would be Royce Gracie vs Minoki Ichihara. The results of the first round so far:

The commentators for the event were Brian Kilmeade, Jim Brown and Ben Perry, no Bill Wallace this time around. 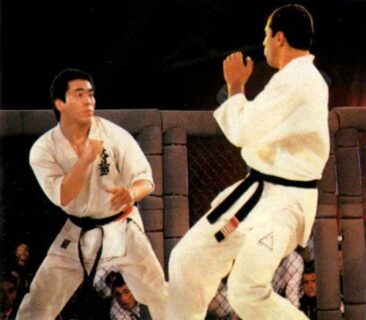 The first televised bout of the evening was the champion Royce Gracie facing Minoki Ichihara, Grappling vs Karate. Even after demonstrating the art of Brazilian Jiu Jitsu in the first UFC event the promotion still decided to tag the discipline as just “grappling”. Both men come out wearing gi’s and this fight gathered interest and all eyes were on the defending champion in the final first round bout. They begin and both press with some kicks, before Royce gets a takedown to side mount. He immediately passes over to full mount, and lands some punches, working the body as Ichihara holds on. He tries to escape, but to no avail as Royce smothers him from the top, landing a headbutt for good measure. Royce works the body some more, and suddenly the crowd go crazy as Ichihara seems to have reversed Gracie off….but in reality Royce has allowed him to turn for leverage, and slaps on a swift armbar for the tapout. This bout was the longest that Gracie had spent in the octagon thus far.

The first quarter-final bout of the evening pits relatively unknown supposed “ninja” Scott Morris against well known kickboxer from UFC 1 Patrick Smith. To begin Scott Morris rushes Smith to engage into a clinch, Smith hits him with a knee that causes Morris to drop and Smith takes full mount and drop punches and elbows that put Morris away. That was BRUTAL. Well the ninja didn’t last very long and Pat Smith looks to have improved massively since UFC 1. 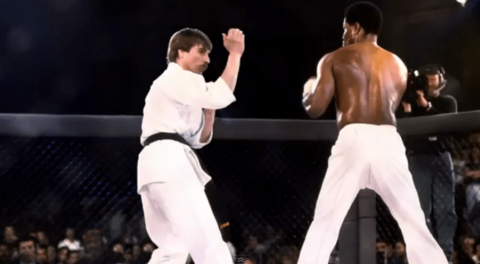 The second quarter-final bout we have karate vs karate, Fred Ettish is a replacement for Frank Hamaker who had to withdraw due to injuries from his first round bout, Johnny Rhodes first round bout went for a full 12 minutes! They exchange kicks to start until Rhodes lands a big right hand that drops Ettish, he follows up with big punches on the ground, Ettish scrambles and tries to stay in the fight but keeps getting pounded and is badly cut at this point. Ettish attempts to get to his feet but is dropped again and this time mounted, he turns his back and Rhodes looks for the choke and gets it as Ettish taps. Although Ettish showed his toughness, Rhodes walked right through him and advances to the semi-finals. 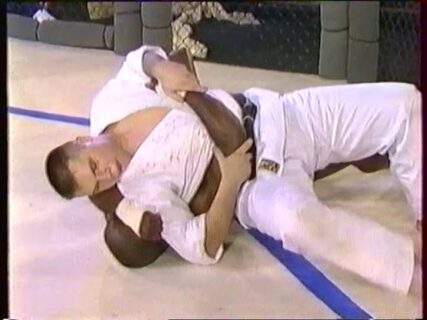 The third quarter-final bout was Dutch grappler Remco Pardoel vs kickboxing champion Orlando Wiet, the commentators are very impressed with Wiet as he showed world class striking skills in his first bout and finished his opponent with brutal soccer kicks. Pardoel had the height and size advantage and his first round bout ran nearly ten minutes. They get started and Pardoel quickly closes the gap to eliminate the striking of Wiet, he gets the takedown but lands awkwardly, Pardoel is laid with his back on Wiet’s chest and Wiet is trapped underneath the big Dutch grappler. After moments of adjusting to the position and Wiet trying to scramble, Pardoel begins raining down elbows on Wiet’s temple which knocks him out cold. Pardoel looks surprised himself as he realises that Wiet is out, another highlight knockout involving elbows. 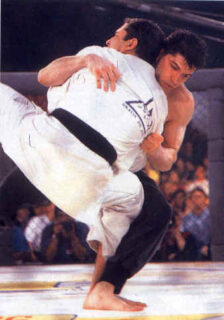 The final quarter-final bout pitted defending champion and submission wizard Royce Gracie against Jason De Lucia who defeated his first round opponent by triangle choke, the first ever triangle in the UFC i believe. De Lucia was also the victor in the alternate bout from UFC 1. The bout begins in the clinch and a different approach from Gracie as he pulls guard for the first time and uses this to transition De Lucia onto his back and into an immediate mount. From this position De Lucia looks to have bucked Gracie off but a repeat maneuver from the Gracie’s first bout he again slaps on an armbar and De Lucia is forced to tap. The bout ran just over a minute and Gracie cements himself into the semi-finals. 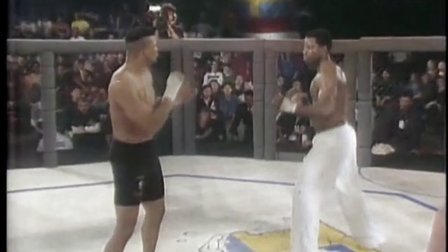 The first semi-final bout which should be a good one pits strikers Patrick Smith against Johnny Rhodes, kickboxing vs karate, Smith finished both of his opponents on the night fairly quickly whilst Rhodes has already spent fifteen minutes inside the octagon. Both fighters are hesitant to start, they exchange kicks and punches and Rhodes catches Smith with a right hand. Smith closes in and they clinch, Rhodes drops his head and Smith grabs it and goes for the standing guillotine choke and gets it! Rhodes taps! Another quick victory for Smith who advances to the finals! 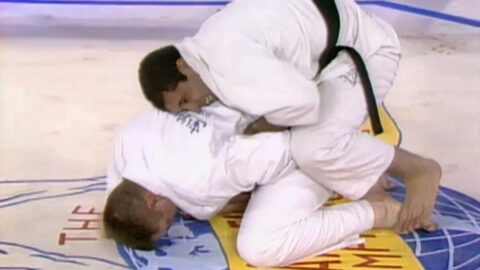 The last semi-final bout of the evening and we have grappler vs grappler in Royce Gracie vs Remco Pardoel, again Pardoel has the size advantage and might be Gracie’s biggest opponent to date. They begin and Gracie throws some low kicks to keep Pardoel at bay, he eventually lunges for a takedown and trips Pardoel and gets to back mount with hooks in. Remco tries to escape but Gracie uses his gi and gets a lapel choke for the tapout. Again we see Gracie submit every opponent he’s faced and again advances to the final! 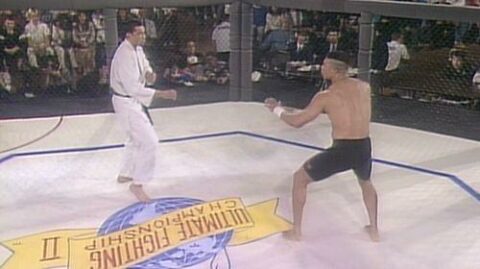 Here we are, the finals! Fourteen fighters have been eliminated and only two remain, Royce Gracie vs Patrick Smith, Grappler vs Striker, the UFC 2 tournament final is set with the winner receiving the $60,000. The bout begins and Smith throws a kick, Gracie then moves in for a body lock and Smith initially does well blocking the takedown but Gracie is relentless and eventually gets him to the ground. It doesn’t take long for Gracie to work his way into full mount and begin landing some hard strikes to Smiths face, moments later Smith taps out! Very surprising as Gracie didn’t even attempt a submission. Royce Gracie is again the Ultimate Fighting Champion! He retains his title and wins the $60,000! Gracie celebrates in the octagon with his family and claims he will be back to defend his title at UFC 3.

Final thoughts, again grappling overcomes all the other martial arts techniques and Royce Gracie submits his way to victory. It seems that this time around the strikers chose to attempt submissions other than just striking, we saw an incredible twelve fights out of fifteen end via submission. Is this because the other fighters have seen the success of Royce Gracie and chose to use grappling in training before the event? Royce Gracie once again shows that Brazilian Jiu Jitsu is king and this time wins the biggest tournament in UFC history, and still to this day holds the record of winning four bouts in one night! 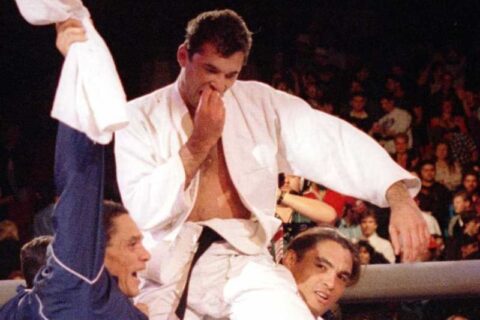 In the next episode of MMA History i will be reviewing UFC 3: The American Dream.

What Becomes of Colby Covington?