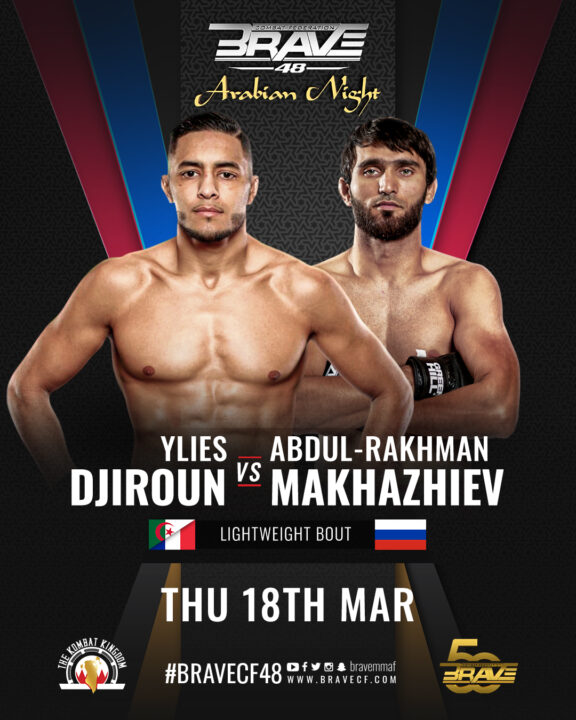 Djiroun made waves by signing for BRAVE Combat Federation, with many speculating what would be his first bout under the promotion’s banner and how long would it take him to climb the Lightweight mountain.

At least part of the question is now answered, as he will be arriving in great fashion, headlining the second leg of the upcoming BRAVE CF visit to the Kombat Kingdom and taking on Abdul-Rakhman Makhazhiev.

The man in charge of welcoming Djiroun to BRAVE CF, Makhazhiev is coming off a first-round submission win over Sanzhar Azhibaev at BRAVE CF 32 and boasts a professional record of 9 wins and five losses in his professional career.

Across the cage, Ylies Djirou holds a record of 17 wins and six losses, being a former European MMA champion and the #1 ranked Lightweight fighter in both Europe and Northern USA.

BRAVE CF 48 takes place on March 18th, in the Kingdom of Bahrain. The event will be the second of four scheduled to the Kombat Kingdom, culminating in the biggest card ever put together by the truly global MMA promotion, BRAVE CF 50. BRAVE CF 48 promises to be a momentous occasion for Arab MMA in general, with fighters from all over the region expected to have the opportunity to further their careers internationally.