The Professional Fighters League (PFL), the fastest growing and most innovative sports league, today announced the promotion of Loren Mack to Senior Vice President of Corporate Communications, just weeks ahead of the start of the PFL’s upcoming 2021 season, which begins on April 23rd on ESPN 2. Mack is an integral part of a broader executive team that is poised for excellence as they continue to work towards the growth of the PFL brand around the globe.

A highly experienced and globally recognized figure in the sports world, Mack was a tremendous addition to the PFL starting July 2020, when he joined the company as Vice President of Corporate Communications. Mack has also greatly helped build the PFL brand – both in the United States and internationally – making the league the number two MMA industry leader in just its’ fourth year of existence.

As Senior Vice President, Mack will play a broader role in growing the brand and business of the PFL, which includes further international expansion to the biggest MMA markets across the globe, while also building a team of like-minded individuals to work with, who are as passionate and as driven.

This comes after the PFL recently bolstered their executive team with the appointment of Tim Clyne as Chief Financial Officer, and Jon Werther as Executive Vice President for Strategic Partnerships and New Business. This bolsters an already impressive top management team that features the best minds in sports, media, and tech.

Prior to joining the PFL, Mack had experience working with the biggest sports and media organizations in the world, starting his career with the UFC and also held the title of Director of Communications for BeritaSatu Media Holdings, the largest media organization in Indonesia.

Mack is currently working on his Doctor of Philosophy in Public Affairs at The Greenspun College of Urban Affairs at UNLV.

“I’m honoured to be promoted to the role of Senior Vice President of Corporate Communications for the fastest-growing sports league in the world,” said Mack. “Working in the PFL means getting to work with some of the best executives in the business across sports, media and technology and that pushes me to continue using my skills and my talents to help build one of the sport’s greatest brands in the PFL.

Congratulations to Loren Mack, who has been promoted to SVP of Communications at PFL, said Professional Fighters League CEO, Peter Murray. The PFL continues to strengthen its world-class management team with expertise in MMA combined with broader sports, entertainment, media and technology.

This is just the latest big move for the PFL right before the launch of their biggest season yet. Recently, the league launched their “MMA’s League Is Back” campaign to highlight the upcoming season. The PFL also formed an Athlete Advisory Board led by pro football Hall of Famer and two-time Super Bowl Champion Ray Lewis. On the broadcast booth, the PFL also strengthened their lineup with the addition of former multiple-time title challenger Kenny Florian.

About Professional Fighters League
Professional Fighters League (PFL) is the first and only to present MMA in the sports-season format where individual fighters compete in Regular Season, Playoffs, and Championship. PFL is the innovation leader with the PFL SmartCage delivering viewers on-screen fight analytics and real-time prop bets. PFL Roster is second to none with 25% of its fighters ranked in the top 25 in their weight class. All PFL 2021 Season events are live primetime on ESPN2/ESPN+ in the U.S. and available on leading broadcast and streaming outlets in 160 countries worldwide. 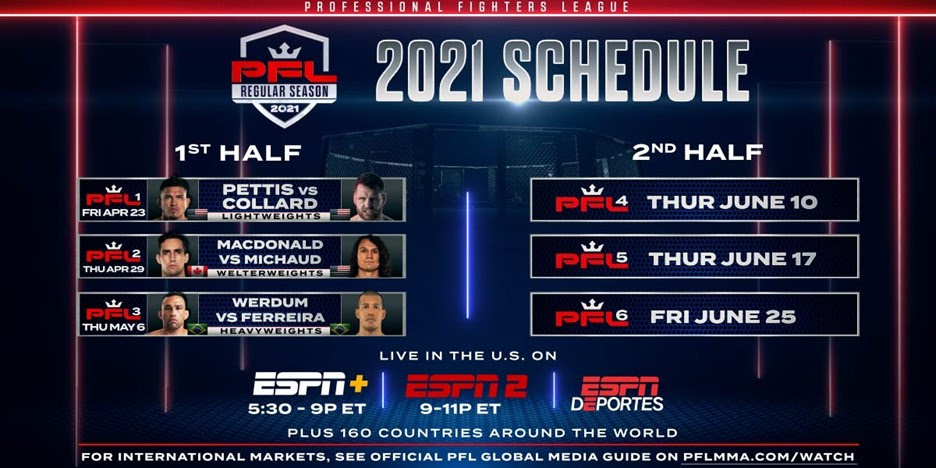 Mike Perry: 'I’ll move to 185 and eat a sandwich with one hand and hit Darren Till with the other'