AN EVENING WITH MICHAEL BISPING: TALES FROM THE OCTAGON ANNOUNCING NEW UK DATES FOR OCTOBER 2022

Michael says:
“I have been blown away by the response for my upcoming tour in October. Ticket sales have been incredible, thank you all. I’ve been listening and reading all your tweets and messages so I’m happy to confirm that I am adding more UK dates for October 2022 so I can see more of you in person.  Seconds out… ROUND 2!!”

His journey has taken him from England’s North West through to the top of the MMA world, becoming the only British champion in UFC history. Alongside a burgeoning Hollywood movie career, the latest chapter in his life sees Michael host a hugely successful podcast, as well as a commentating for ESPN, BT Sports, and formerly Fox Sports. From fighting stories to life outside the ring, his unwavering drive and determination will make for an inspirational and entertaining evening for all UFC and sports fans alike.

When working numerous dead-end jobs to make ends meet whilst all the time training in boxing, kickboxing, and Jiu-Jitsu, Michael realized he had the potential to be a world-class fighter, and doing so would be his best opportunity to provide for his family.  He rededicated himself to this craft.  Michael eventually went on to win The Ultimate Fighter 3 in 2006, kick-starting his professional career, and ten years later in 2016 at UFC 199, he became the first British fighter to become a UFC Champion.

After an incredible 13 year career, which included the loss of his right eye, Michael became a UFC analyst with BT Sport and ESPN, named FanSided MMA’s 2019 Analyst of the Year, and authored Sunday Times Best Seller Quitter’s Never Win.  He’s the host of the ‘Believe You Me’ podcast and has launched a successful acting career, having been featured in xXx Return of Xander Cage, Den of Thieves, and announcing his latest roles in Den of Thieves 2 and the lead in the upcoming film titled The Journeyman.  His documentary titled ‘Bisping’ is also coming out in 2021.
An Evening With Michael Bisping: Tales From The Octagon

Tickets on sale now
via www.myticket.co.uk/artists/michael-bisping 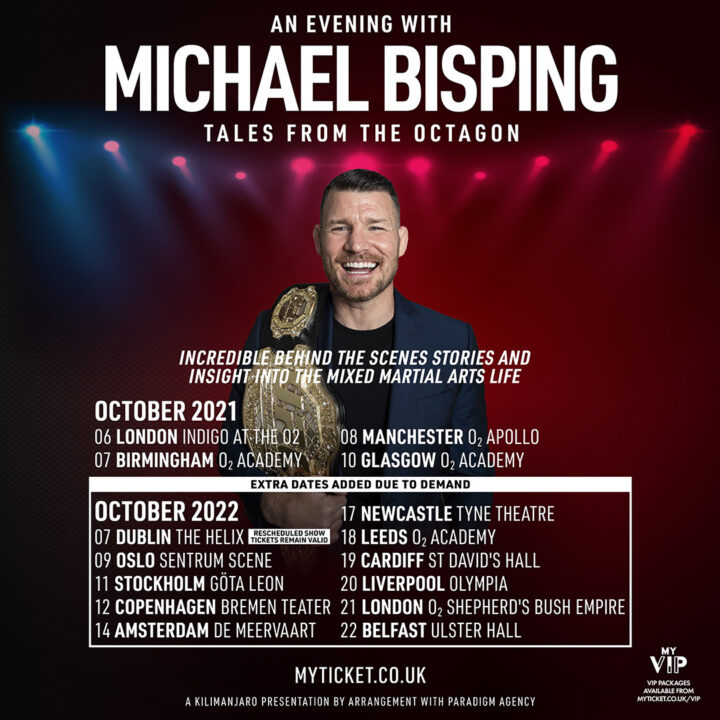