Celtic Gladiator 22 takes place at Victoria Warehouse in Manchester, England on Friday 30th November. Local fighters Brendan Loughnane, Lerone Murphy and Kane Mousah will be fighting in what is shaping up to be an exciting and well-curated card.

Loughnane hails from Manchester and currently lives and trains with former UFC Bantamweight champion Dominick Cruz in the US. His last fight was a victory – a third-round head kick KO against Paata Tsxapelia (12-3-0) at ACB 75 almost exactly a year ago.

Amaury Junior trains at Brazilian Top Team in Rio de Janiero. He has 9 submission wins as a pro and is looking to cause an upset in front of the Manchester crowd. 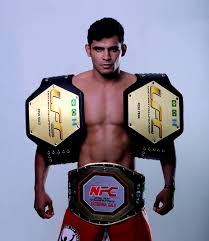 Lerone Murphy trains at All Powers Gym in Stockport. Brendan Loughnane who is also fighting on this card has trained here in the past. Formerly a lightweight, Murphy moved down to featherweight for his two previous fights and has seen continued success after dropping a weight class.

Multiple time world Muay Thai Champion and ONE Super Series fighter Panicos Yusuf teaches at All Powers and this is reflected in Murphy’s record – four of his six wins came in the first round from striking.

Ayton De Paepe trains at Perfect Team MMA in Antwerp, Belgium alongside Cindy Dandois and Jan ‘Q-Bomb’ Quaeyhaegens. Starting his pro career with 7 wins in a row, the only loss on his record was his last fight almost a year ago to the day against the still unbeaten Jack ‘The Tank’ Shore (9-0-0) at Cage Warriors 89. He was submitted with a rear naked choke in front of his home crowd at the Lotto Arena in Antwerp.

The co-main event features another hometown boy – Kane ‘The Danger’ Mousah (10-2-0) takes on Brazil’s George Emanuel (4-2-0) in a featherweight clash.

Kane Mousah fights out of Team Rough House in the East Midlands, England, the home of long-time professionals like Paul ‘Semtex’ Daley, Jim Wallhead and Dan ‘The Outlaw’ Hardy. He kicked off his pro career with a 7-fight winning streak.

Coming off a loss from Robert Whiteford (15-4-0) – the first Scottish man to sign for the UFC – Mousah hopes to prove this to be just a bump in the road. Both fighters have well-rounded records and George Emanuel has never seen the third round as a pro.