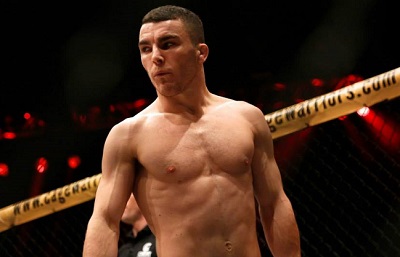 Four more bouts have now been added to the Cage Warriors 70 fight card which is to take place on August 16th at The Helix, Dublin. Just a month after the UFC hit the Irish waters.

This being said however, two originally planned matchups have been disrupted by injury. Paul Redmond was previously lined up to take on Micky Doyle but injury has meant that Doyle has had to withdraw. An injury to Kieran Davern has meant that his bout against Carl Booth has resulted in the promotion searching for a new opponent for Carl Booth.

The event will now also feature a bantamweight bout between Martin Sheridan and the undefeated Dean Garnett (pictured), with Ronan McKay and Craig White set to do battle in a middleweight affair.

In women’s atomweight action, Catherine Costigan will be aiming to keep her unblemished record intact when she takes on promotional debutant Noelia Molina, while a lightweight tussle will see Ryan Roddy lock horns with Louis Chapman.

“Irish MMA is riding the crest of a wave at the moment and we’re looking forward to continuing to push the sport forward in Ireland, as we have been doing for the last few years, when we return to Dublin for another exciting event on August 16,” said CWFC’s Director of Operations Paul Dollery.