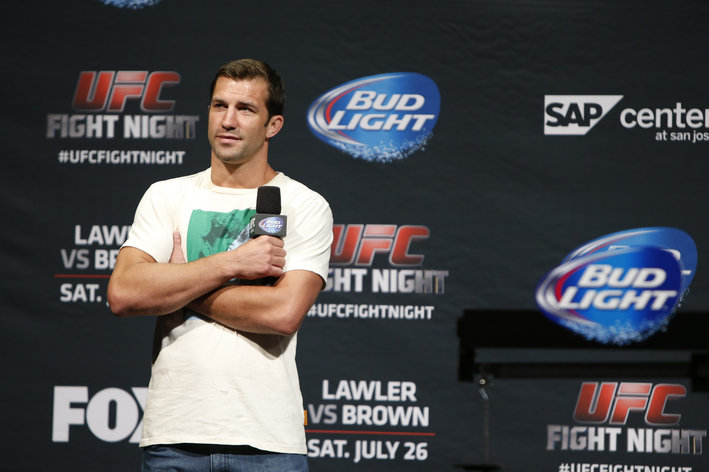 Just before the UFC Fight Night: Lawler Vs. Brown weigh-in, Cung Le and Luke Rockhold took to the stage in a Q&A for the UFC Fight Club members and when the subject of Michael Bisping came up neither pulled any punches in showing their dismay for the Brit.

“I can’t wait to kick Michael Bisping’s face in Aug. 23 in Macau,” said Le who faces Bisping in the main event on Aug. 23 in Macau, and he continued “He’s just like Frank Shamrock, who went on YouTube, and talked a little trash. When he’s talking, I’m training. I’m ready and I’m in shape,”

Some fighters can be put off by trash talk, the likes of which Bisping is well known for. He can get under your skin and win the mind game before either fighter has entered the cage. Cung Le isn’t bothered and doesn’t fall into those traps.

“Michael Bisping is known for it,” he said. “It doesn’t bother me at all. I’m really thick-skinned. I don’t have a good line, but I have a lot of combinations on August 23rd for his face.”

Then is was Luke Rockhold’s turn to verbally assault Bisping. Rockhold, who has been incredibly vocal in interviews and social media about how uch he dislikes Bisping, said if they were to eventually meet he would  target ‘The Counts” weak spot, his injury prone eye.

Rockhold was then asked about the differences between Bispings trash talk and that of Chael Sonnen.

“I think Bisping’s just a douche,” he said. “Chael is putting on an act. He talks trash, but he’s the most respectful guy every time I’ve met him. Chael plays a role. Bisping plays himself.”

However much he may dislike Bisping, Rockhold doesn’t think a fight between them is in their future. Luke indicated that he believes Le will finish Bisping, and therefore a fight against Bisping would be a step backwards.

UFC Fight Night: Bisping vs. Le will take place on August 23 2014 at the Cotai Arena in Macau.