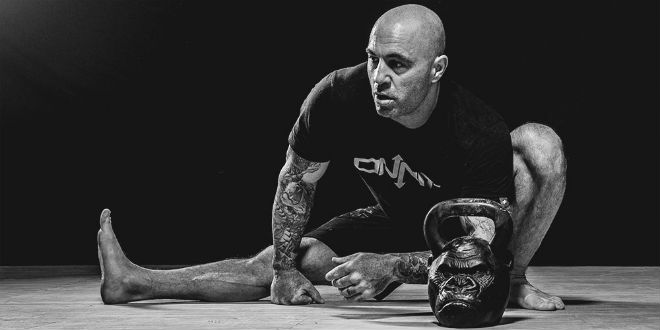 Joe Rogan is a well known American stand-up comedian, actor, writer though he is probably best known for his commentating for the UFC. What the average casual fan doesn’t know is that Joe has a legit martial arts background.

He started Judo at the age of twenty and after a year of training received a blue belt. In 1996 he began training in Brazilian Jiu- Jitsu under Carlson Gracie. He received his black belt under Eddie Bravo 10th Planet Jiu-Jitsu and a black belt in gi Brazilian Jiu-Jitsu under Jean Jacques Machado. He has also trained in Muay Thai and trained kickboxing with former world champion Rob Kamen.

There is no doubting his credentials as a martial artist, but just how far could he of gone if  he decided to fight for a living? Joe has admitted himself he wouldn’t have wanted to be a fighter incase he got his head caved in, but he was once  challenged to a fight by the actor Wesley Snipes who is a fifth level black belt in Shotokan Karate but Snipes pulled out. According to Joe it was because Snipes found out that Joe had been training martial arts his entire life and wasnt just a stand up comedian.

At the age of 46 we will never know if Joe would have cut it as a MMA fighter at the highest level, but what would have happened if Joe joined UFC 21 years ago at the very beginning as a fighter?

Would he have got his ass kicked or would he, with the right mindset, competed with the best and do the unthinkable and become Joe Rogan – UFC Champion?