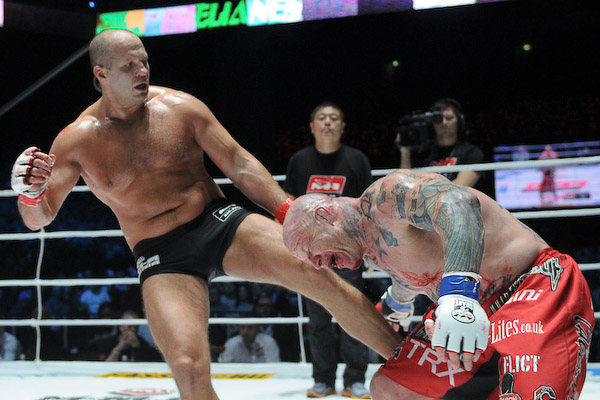 The PRIDE legend and, in many eyes, the true Greatest Of All Time Fedor Emelianenko is currently in Calgary, Canada helping to promote the sport in which he made his name, mixed martial arts.

In an article with the Toronto Sun, Fedor talked about many subjects in the modern MMA world. One of which was who he’d face next. No, he isn’t coming out of retirement, but if he were he knows exactly who he’s choose to fight.

“Cain Velasquez,” Emelianenko said “He has some technical difficulties, but he has ambition and he’s fearless. He wants to win so badly and he’s in great condition. He’s a thinking fighter.”

Unfortunately for us fight fans, we will never get to see that fight as the 37-year old Fedor remains retired. But he’s still involved in the sport. Emelianenko is busy promoting amateur MMA as the honorary president of the World Mixed Martial Arts Association. Thats why the legend is in Canada.

“I’m really here to promote the sport, provide support for Canadian fighters and be here to celebrate the joining of (the Canadian MMA Federation and the worldwide organization),” Emelianenko said “Getting MMA in the Olympics is the main goal. Right now we’re focusing on the safety of the sport and putting all the rules and practices in place to adhere to world standards of the sport and make sure it’s safe.”

‘The Last Emperor’ retired back in 2012 after defeating former UFC heavyweight title contender Pedro Rizzo via KO, extending his record to an impressive 34-4-1 in the process, with 28 of those wins coming back to back (technically there was a ‘no contest’ in the middle of all those but lets not focus on that). Fedor still looks like the same man that would enter the cage because he’s still training, the only difference between now and then is that he doesn’t have to fight as an end result.

“I still train, so there isn’t much that I miss,” said Emelianenko, who’ll also be doing work with Sambo Canada while he’s in the country. “A true athlete is someone who doesn’t just stop training when they stop competing. It’s a way of life and they keep in shape just to keep up that standard.

“Plus, there’s a lot of younger guys who would like to take me down, so I always need to keep up because I definitely don’t want that to happen.”

Fedor stood out from the rest of the MMA fighters because he lived a fairly solitary life. He didn’t train with a big camp full of other big names and he didn’t weak out the media attention that others so eagerly crave. He feels his lifestyle is one of the keys to his success and he believes the young fighters of today should avoid the glamour of the modern day MMA star.

“It’s essential for a fighter to go separately and just focus on training away from everybody else,” Emelianenko said. “(To be an MMA fighter) takes hard work. You need to be fearless. You need to see your target and go for it. You have to turn all your negatives into positives and all your weaknesses into strengths.”

Fedor will forever spark debate on whether he was the greatest fighter to grace an MMA cage/ring but one things for certain, he was definitely an elite fighter.

Do you think Fedor could still hang with the youth of today?