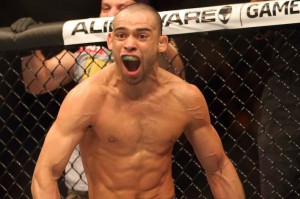 Just hours after Henry Cejudo withdrew from UFC 177 for “medical reasons,” it has now been learned that event headliner Renan Barao is also off tomorrow night’s (Aug. 30, 2014) pay-per-view (PPV) card at Sleep Train Arena in Sacramento, California, after fainting during his weight cut.

Taking his place is Joe Soto, who was pulled from his bantamweight fight against Anthony Birchak on the FOX Sports 1 Prelims. Soto, despite being unfamiliar to casual UFC fans, was actually a champion under the Bellator banner and can be considered a formidable challenge for  “The Viper.”

But this latest news damages a card that already suffered from a lack of star power so it will be interesting to see what kind of PPV buys UFC 177 does with the loss of Barao.

Huge news and in so little notice! What are your thoughts on this one?