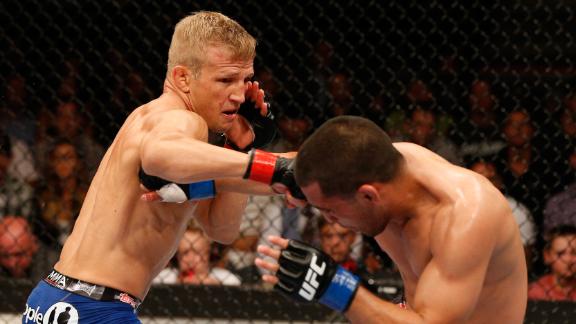 The event was originally planned to take place at the MGM Grand Garden Arena in Las Vegas, Nevada, with a Light Heavyweight Championship rematch between the current champion Jon Jones and challenger Alexander Gustafsson targeted as the event headliner.However, that bout was pushed back a month and scheduled to headline UFC 178.

A Bantamweight Championship rematch between current champion T.J. Dillashaw and former champion Renan Barão was expected to headline this show. Their first fight, contested at UFC 173, ended in a fifth round TKO victory for Dillashaw. However, the day of the weigh ins, Barão had to be admitted to the hospital as a result of his attempts to cut weight. Dillashaw faced UFC newcomer Joe Soto in the main event.Soto’s opponent, Anthony Birchak, was removed from the card entirely.

Demetrious Johnson was expected to defend his Flyweight Championship against Chris Cariaso in the co-main event.However, on August 12, it was announced that bout would be moved to headline UFC 178 after Jon Jones against Daniel Cormier was delayed due to injury.

As a result of the cancellation of UFC 176, bouts between Danny Castillo vs. Tony Ferguson, Lorenz Larkin vs. Derek Brunsonand Bethe Correia vs. Shayna Baszler were rescheduled for this event.

A heavyweight matchup between Ruslan Magomedov and Richard Odoms was official for this event. However, Odoms was forced to withdraw and the match was cancelled.

Justin Edwards was expected to face Yancy Medeiros at the event. However, Edwards pulled out of the event in the days leading up to the event citing an injuryand was replaced by newcomer Damon Jackson.

Scott Jorgensen was expected to face Henry Cejudo at the event. However, Cejudo pulled out of the bout on the day of the weigh ins due to complications trying to cut weight.

Due to the many unexpected changes, Joe Rogan began the event’s weigh ins show by introducing the crowd to “the haunted UFC card”.With the event taking place with only eight bouts on the card, it was the smallest UFC PPV card, since UFC 72 in 2007.

The following fighters were awarded $50,000 bonuses.

An Interview With Robert Whiteford