by Peter Knox
in MMA News
13 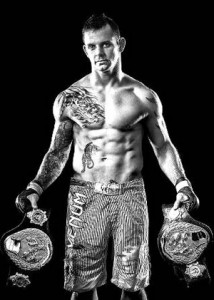 On March 14th we will see a packed night of amateur MMA action in Willington, Durham, headlined by a professional bout between Mikey Hogarth (1-1) (pictured) and David Young (1-0). In Hogarths last outing on February 28th he made very short work of his opponent on Made 4 the cage, stopping him via guillotine choke only 14 seconds into the fight. David Young also stopped his last opponent in the first round via choke. The two promise to put on a great fight for the local fans.

Also on the undercard there’s some of the best local up and coming MMA talent ready to climb the ladder in their careers. Raf Voza faces off against Craig Skelton which promises to be a great fight as both are very talented fighters. Voza fights out of Andrew Fishers “Fishtank” and has stopped his last 2 opponents quickly within the first round to remain undefeated.