Fights to make after UFC 189 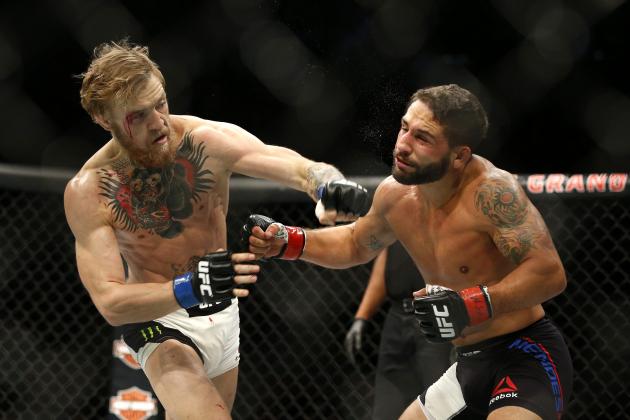 This is a given, obviously after Conor’s come back win against tough opponent Chad Mendes last saturday he has proved himself more than worthy of his place near the top. By dispatching another victim in the 1st couple of rounds, this time a top contender he has cemented that he needs to be uniting the belts and taking on Junior.

It appears that it has been announced though that Conor will be facing Urijah Faber as the upcoming coaches on the next season of TUF, which should prove interesting considering they already have a fairly apparent dislike of each other. (see pre weigh in antics at UFC 189, followed by Fabers comments saying that Mcgregor looked like a crackhead)

A lot of people were criticising Mendes’s short champ saying this was the reason for him gassing out early, although many experts will refer you to the volume of snap kicks and targeted body/liver shots from Mcgregor. Frankie is on the biggest streak in the division other than the champion and without a doubt is a tough fight for anyone. This is easily a fight that makes sense, and a knockout or submission win for Mendes could make him immediately relevant at the top of the division again.

Robbie Lawler was 3 rounds down going into the fifth against Rory Macdonald on saturday before landing a vicious punch that demolished his nose and finished the fight.

There is a lot of talk about Robbie having another rematch with Johnny Hendricks, but to be honest I would rather see more oppurtunity given to a fresh candidate in this long standing stagnant division that has only got interesting as of late. Carlos Condit may have only one fight but has long time been a top contender and without a doubt this is a fight that we need to see. Hendricks is only on a single fight streak and I think there is no doubt that Condit would be without a doubt a win win for the fans.

Rory Macdonald Vs. Johnny Hendricks. Without a doubt people would want to see Rory fight for the title again. After his superb fight with Lawler which arguably had Rory up on the judges scorecards this is absolutely the right fight to cement who deserves the next rematch with the Champ.

I read a tweet form Bermudez earlier saying Dana had offered him a rematch and he had accepted. Jeremy Stephens had missed weight although both fighters put on a stellar back and forth performance before Stephens landed the vicious jumping knee knockout. Both guys are in a similar place in the division and this again would be a win win scenario for the fans.

Nelson after his very fast dispatching of up and rising popular fighter Brandon Thatch has showed that he is ready again for a big name in the division. He has just recovered from the first loss of his career in a close fight with Rick Story however stylistically the two above fighters I think would prove very interesting. Demian Maia is on a two fight win streak against lesser competition after two losses to big names in Rory Macdonald and Jake Shields. Dong Hyun Kim recently had a dominating performance and submission win over Josh Burkman who was coming of a NC to Hector Lombard. Again Dong has been well known for his dominating and smothering top game; Demian Maia is a well known highly respected BJJ black belt therefore without a doubt a fight with either of these would be very interesting.

It’s been a rough road for Brad Pickett who is now on a 3 fight losing streak. He has faced some of the best in the division but ‘One Punch’ definately looks weathered from the journey. I think a fight with Alex ‘Bruce Leeroy’ Caceres is the fight that makes sense for him right now. Alex is also on a 3 fight win streak and we could see both fighters come out looking to swing to make a statement about who deserves to stick around, and who needs to leave town.

Thomas Almeida has looked very impressive dispatching both veterans Pickett and Yves Jabouin in his last two fights. Perhaps a fight with Michael Macdonald who defeated Pickett in round 2 also in his penultimate fight, before losing to veteran Faber via guillotine. Mcdonald claiming a 20-0 up and coming prospects scalp could definitely show the rest of the division that he is still a force to be reckoned with.

Turning On The Jets