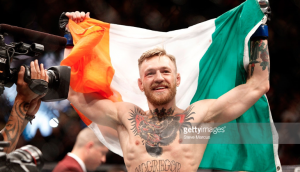 ‘The Notorious’ Conor McGregor took to Facebook today to give his thoughts on being a top 25 sex symbol of 2015, his appreciation of the MMA media and them awarding him fighter of the year. When it came to Floyd Mayweather the irishman didn’t hold back and gave his thoughts Mayweather’s recent comments on the champ.

1. Rolling Stone, thank you for putting me as one of your top 25 sex symbols of 2015! My Mother will be delighted and proud!

2. ESPN, FOX, BT Sports, MMA Fighting, Yahoo, MMA Junkie and Sherdog thank you all for awarding me fighter of the year 2015!
I appreciate all the hardworking media and their love and commitment to the sport is truly valued.

4. Floyd Mayweather, don’t ever bring race into my success again. I am an Irishman. My people have been oppressed our entire existence. And still very much are. I understand the feeling of prejudice. It is a feeling that is deep in my blood.

In my family’s long history of warfare there was a time where just having the name ‘McGregor’ was punishable by death.

Do not ever put me in a bracket like this again.

If you want we can organise a fight no problem.

I will give you a fair 80/20 split purse in my favour seen as your last fight bombed at every area of revenue.

At 27 years of age I now hold the key to this game.

The game answers to me now.

5. Media instigators/An Garda Siochana.
I apologise for having the air-soft in public. I was simply rehearsing for a potential upcoming film role.

I understand that the more traffic a story can get the more revenue it generates. So I understand and respect that the media must create these stories and these situations even if at times it is at other people’s expense.
We’ve all got to eat. And I eat well.
So I will not complain.

6. My next fight.
What can I say, it’s just another night of easy work for me.

I don’t just own the game. I run it too.