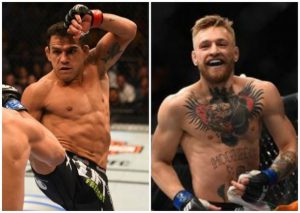 The week started great for both McGregor and Dos Anjos fans, but it appears that the UFC 197 headline fight is anything but official.

Reports have come in and according to Globo, both the main and co-main event for the upcoming UFC 197 event scheduled for March 5th, were planned to be announced at halftime during the Green Bay Packers vs. Washington Redskins last Sunday (10/1/16).

Rumours say that McGregor is yet to sign the contract which has caused a delay in the fight being officially announced. According to sources, the delay is a result from McGregor demanding more money from the promotion.

Rafael Dos Anjos‘ manager took to Twitter to air his opinion on McGregor:

Updates have recently come in from Conor McGregor‘s manager denying the delay is due to ‘Notorious’ demanding a higher payout.