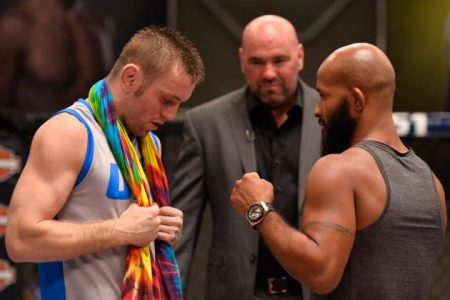 Following UFC TUF Finale last night, Tim Elliot lost by unanimous decision against P4P king Demetrious Johnson in a somewhat bizarre contest, prior to the fight Elliot was a monstrous underdog with the odd makers, having him at +650 with some book makers and what many believe to be the most complete fighter the game has ever seen (ask Joe Rogan, long-standing UFC commentator, he’s a big fan), with this said, Elliot had ideas of his own and at the very least, made the P4P king feel very uncomfortable (to say the least) landing a left hook that stunned the champ and attempting submissions, putting the champ in some difficult positions (guillotine choke followed by D’arce).

This appeared to affect the challenger more so than the champ, showing signs of fatigue when the fight was resumed on the feet, putting his hands on his knees, moving visibly slower with less urgency than before the attempts. Elliot was stifled somewhat by the champs skills, speed and takedowns which appeared to affect Elliott game and attempts to make this more of a street brawl contest consisting of unorthodox strikes and takedowns.

Johnson went on to take the victory by unanimous decision (49-46,49-46,49-45) but Elliot can take solace in the fact that this was the most difficulty the 125lbs champ has faced at this weight class (at least since the birth of the weight class and his 1st contest with uncle creepy Ian Mcall) Elliot spoke at the post fight press conference stating he had some difficulty making the 125lbs weight cut, that he had told his coaches (James Kraus) “I’d like to go to 135lbs, the weight cut killed me, I struggled with the weight cut, I actually, the morning of the weigh-ins i was hurting pretty bad, “the first time ive ever told my coaches I was done, I told James Kraus ii was done & im not going back in the sauna, told em id give up the 20% (purse), that I didn’t care about the belt, he made me get back in there, made me cut the weight, I’d do better at 135, I feel better, I’ll feel strong, I was hurting after the first round, I know that’s from the weight cut”

Elliot went on to say that Johnson is “the best, there’s no doubt about it, I wanna get fans through fighting, not from anything else” he went on to comment on incident where Demetrious Johnson pinched Elliots nose, “nah man I laughed, I liked it, that’s the sort of stuff I do, l love that, I love the dirty, grimey, dirty stuff , I think its great, there should be more of that in the sport,, it’s a fist fight, I mean, it’s a fist fight, name another martial art that you plug the guy’s nose and try to stop their breathing with your hand, it only happens in a fist fight, I love that shit, I live for that, I think its great he’s trying that, its good for they sport, let’s make it grimey”. Tim Elliot was cut from the UFC following two consecutive losses, be that to John Dodson (DECISION) and Joseph Benevidez (SUBMISSION) (incidentally coached Elliot on the TUF show he had just won to get the title shot against Johnson), Tim Elliot is yet to be offered a UFC contract following the fight but is hard to imagine, with the performance he displayed, he’ll be fighting under another banner any time soon.