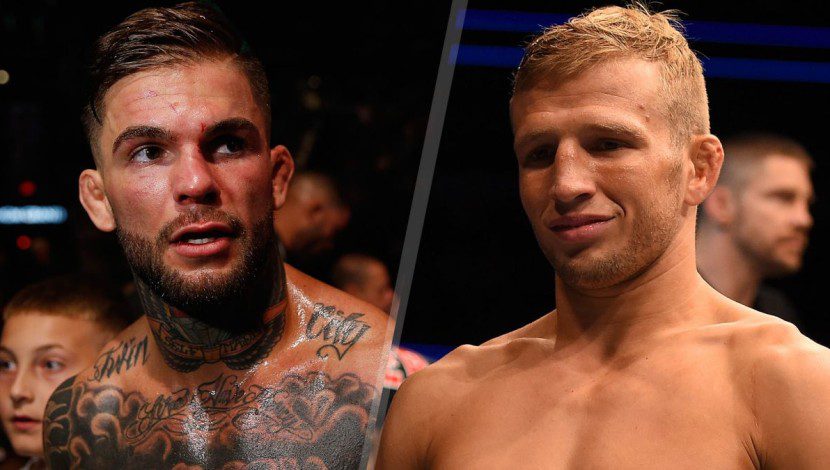 GARBRANDT AND RIVAL DILLASHAW TO COACH NEXT SEASON OF TUF

The landmark 25th season of The Ultimate Fighter® will feature two of the top pound-for- pound fighters in the world as coaches with newly minted bantamweight champion Cody Garbrandt coaching opposite former teammate and arch nemesis TJ Dillashaw, the former titleholder and current No. 2-ranked contender seeking a return to the top.

Garbrandt and Dillashaw will lead a cast of welterweights who all have redemption on their mind. Every member of the cast, including one athlete on the current UFC roster and previous Ultimate Fighter winners, have competed on a previous season of the show, which remains the highest rated and most watched original program on FS1, and look to prove they belong in the upper echelon of one of UFC’s most stacked divisions. The Ultimate Fighter: Redemption will premiere with a two-hour episode on Wednesday, April 19 at 10 p.m. ET.

With a perfect 11-0 record, Garbrandt (11-0, fighting out of Sacramento, Calif.) is proof that the future is now for the next wave of UFC superstars. The Team Alpha Male product defeated arguably the most dominant champion in Zuffa history, Dominick Cruz, at UFC 207 last month in dominating fashion. At just 25 years old, “No Love” is quickly becoming a fan favorite and has already made each of his fights a must- see event. With nine wins by knockout, seven in the first round, Garbrandt has the one-punch knockout power that has made him one of the most feared athletes in mixed martial arts.

A member of season 14 of The Ultimate Fighter, Dillashaw (15-3, fighting out of Denver, Colo.) is no stranger to the power and platform the competition provides; he’s one of six athletes who have competed on the show and gone on to become a UFC champion (Forrest Griffin, Rashad Evans, Michael Bisping, Matt Serra, Carla Esparza). Additionally, the former champ has an axe to grind with both Garbrandt and his training camp. His split from powerhouse Team Alpha Male has been widely publicized, creating one of the most intense rivalries in MMA. When he meets Garbrandt in the Octagon after the season concludes, Dillashaw will also be looking for redemption as he attempts to regain the world title he feels is rightfully his.