by Lewis Smith
in UFC
1

It’s the fight that everyone’s talking about – Conor McGregor vs. Floyd Mayweather- the Boxing/ MMA crossover match that seems more and more likely to happen every day. So how much money can each fighter expect to make from a mega fight such as this? UFC president Dana White believes he has a rough idea.

“It depends on how much the fight sells. And if the fight sells as well as I think it can, Floyd makes a little north of $100 (million) and Conor makes $75 (million),” White said on Wednesday’s episode of The Herd. 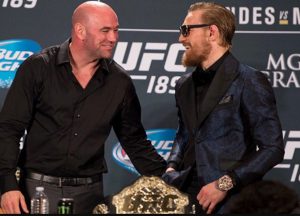 At one point in time it seemed as thought the boxing match never had a chance of going ahead. Though now, with such a huge interest from the public, it seems to be only a matter of time before a deal gets done.

While White has yet to begin negotiations with Mayweather’s camp, he plans on getting his side of the arrangement  solidified- with father to be McGregor- as soon as possible.

“Mayweather feels like he’s the A-side and he should get more of it. We haven’t really gotten into that negotiation yet. I wanted to get McGregor locked in first, because McGregor is under contract with me,” White explained.

“It’s not going to be UFC. It’s going to be a boxing match. It’s not going to have anything to do with the UFC. My brand, the closest thing my brand will be to this is obviously I’ll be a part of the promotion for the fight, and Conor’s my guy. That’s it,” White went on.

“But I promised Conor I’d do everything I could to make this thing happen, so that’s what I’m going to do.”