Vegas All Set for Nunes vs Schevchenko At UFC 213

UFC 213 is all set to Host two massive title fights inside the T-Mobile Arena in Las Vegas, Nevada on Saturday July 8, 2017, Bantamweight title fight that will see current division champion Amanda Nunes attempt to defeat Shevchenko once again for the second time and still be Bantamweight champion.

The pair originally went to war at UFC 196 in March of 2016, With Nunes taking home a unanimous decision victory. Both women have been on a roll since then, with Nunes winning the division belt after knocking out Miesha Tate at UFC 200 and shocking the world with a huge win over Ronda Rousey.

As for Shevchenko, she took out former champion Holly Holm and top contender Julianna Pena while working her way up the UFC ranks and making a big name for herself in the Bantamweight division.

Also with a huge undercard at UFC 213, Robert Whittaker and Yoel Romero will go head-to-head for the interim Middleweight title. Plus Fabricio Werdum and Alistair Overeem is also going to keep you entertain for the build up to the main event. 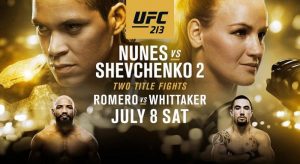 Get all the UFC events added to your calendar or event if you want to just know about upcoming ones click the link below.