After all the heated trash talk, Kamaru Usman retained his welterweight belt as he viciously stopped Colby Covington by 5th round TKO in the T-Mobile arena, Las Vegas.

After almost 25 minutes of constant, fast-paced action of what seemed to be a gruelling fistfight with few kicks here and there, Usman triumphed to stop Covington in the final fifth round to retain his welterweight crown.  Covington, on the other hand, was left running out the octagon with a supposed broken jaw.

Even with the broken jaw and stoppage, the American will probably find it hard to find much sympathy as he’s made enemies from fighters, fans, his teammates and generally anyone who dislikes Covington’s antics.

As Usman said in his post-fight interview: “This one’s not just for me, this one’s for the whole entire world right now.”

The fight was close with both matching each other with a high volume of strikes.  Rather surprising how both fighters did not attempt any of their wrestling.  Perhaps afraid to gas out and an underlying respect for each other’s grappling ability.

Covington indicated at the end of the third round that his jaw was broken.  However, neither man slowed down going strike for strike, toe to toe showing the world that these two were indeed the best fighters in their division. 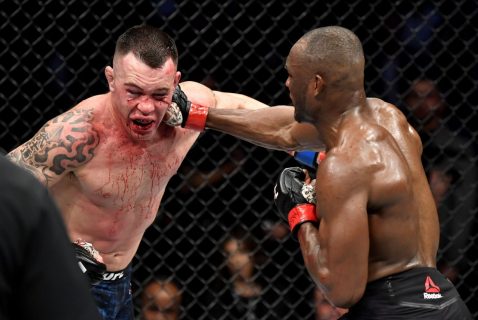 The difference between the two was Usman’s superior punching power as it became clear visually on Covington’s face.  The American had cut across his face with blood streaming down his face as well as the damaged jaw.   Consequently, Usman closed the show in the final round as the Nigerian knocked down Covington twice with a perfect right hand both times, before ground and pounding the American to which Marc Goddard had seen enough and stopped the fight.

Usman made his first successful title defence after clinching the belt from the former champion, Tyron Woodley back in March.  The Nigerian is now riding high on an 11-fight winning streak in the UFC which is the second-longest in the welterweight division, one behind George St-Pierre who has 12.

This fight was to showcase who the best fighter in the division was.  Both fighters had won a belt (though Covington was stripped of his interim belt) and were on incredible winning streaks, beating everyone on their path to the top.

As a result, both fighters powered through to the top of the division with wins over the same opponents (Demian Maia, Rafael dos Anjos).  It seemed almost surreal how both fighters mirrored each other in terms of record and fighting style.

The stakes were high for this fight, amplified even more with Covington’s obnoxious trash talking.  However, it was the Nigerian who prevailed on the night and he now looks to create more history.

Across The Pond Profile: Ring of Combat fighter Phil Caracappa