When we’re talking about the MMA fighter of the year for 2019, it’s really a two-horse race between the recently crowned BMF, Jorge Masvidal and the UFC middleweight champion Israel Adesanya.  Both have achieved astounding success inside the octagon this year and have every right to be the fighter of the year.  The fact that it won’t be unusual for either to take this honour is a credit to how both athletes have separated themselves from the pack to emerge as the two vying for this recognition.

So, the fighter of the year ultimately boils down to how you view it.  Their journey to glory has been quite different as well as the type of success they’ve achieved.

Let’s kick off with Masvidal.  A veteran of the game who’d been an MMA pro since 2003.  Wait, the ponytail guy from the Kimbo Slice backyard fights on Youtube?  Although the MMA community had always appreciated his fighting skills, to casual fans he was still mostly known as the guy who’d competed in those street fights with the late Kimbo Slice.

When Masvidal returned from a 16-month layoff to face Darren Till, most fans looked on with concern.  Riding a two-fight losing streak back in 2017, facing Till in his backyard who’d just competed for the welterweight title seemed like a bad idea.  On the contrary, the bout was seen as a winnable fight for the Englishman to hopefully bounce back into the winning column.

At a crossroad in his career and in his mid-30s, Masvidal was the underdog against the young, hungry Till.  Not only did Masvidal dispatch of the Englishman with a devastating knockout, but he gave out the now infamous ‘3 pieces with the soda’ to Leon Edwards in a backstage altercation after the fight.  Both of which propelled him to star power, with the latter quote going viral. 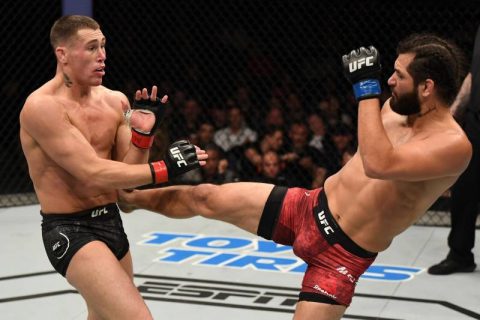 Nicknames like ‘Street Jesus’ came about which personified his character, that he would ‘baptise’ opponents to send them to the shadow realm.  Essentially meaning he was here to finish fights and not leave the fight to a decision.  Who can blame him when he’s been on the wrong side of the judges a number of times?

Masvidal said recently, “How about if I just ended people with no decisions.  I had to separate myself from the pack. The only way to do that is to end individuals.  Fools are getting baptised from here on out.”

He certainly wasn’t joking.  Masvidal had come out punching, silencing his critics.  He was a different man.  Hungry and determined with a newfound sense of aggression in his fighting style; the Cuban-American was on a mission.  The 16-month layoff proved invaluable to Masvidal as he re-evaluated about his whole fighting career whilst doing a reality show in the Dominican Republic.  Away from technology, social media and all the distractions of the world, Masvidal became one with nature and as a result, was able to find that shift in mindset to unlock ‘Street Jesus’ so to speak.

Afterwards, he was up against the undefeated loud-mouthed wrestler, Ben Askren.  Critics were again sceptic about this bout considering Masvidal had struggled predominately against grapple-heavy opponents in the past.  Furthermore, Askren was coming in unbeaten and had been world champion in two different organisations (Bellator, One Championship).  Again, Masvidal was the underdog.  5 seconds is all it took for ‘Street Jesus’ to ‘baptise’ Askren with a flying knee.  A new record for the fastest knockout in UFC history.  Masvidal was flying high.  His superstardom shone brighter than ever.  The 5-second knockout immediately went viral.  Here’s a video of the knockout in case you haven’t seen it!

Then to top it all off, ‘Street Jesus’ dominated Nate Diaz in violent fashion at UFC 244 to win the inaugural BMF title – a belt specifically created for these two individuals.  Masvidal had accomplished possibly the greatest comebacks in a sporting career.  He reinvented himself as a new fighter looking to ‘baptise’ opponents.  Now, he’s known as one of the most violent and popular fighters in the MMA world.  No one had seen it coming.

Let’s be honest who would have expected a fighter 16 years into their professional MMA career to suddenly have so much star power?  No one except for Masvidal knew what was to come.  His rise to the top has been electrifying, to say the least.  It makes me happy for him to finally receive the recognition he deserves after 16 years. 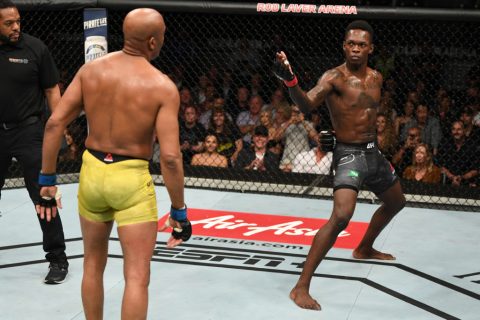 From what I’ve said so far, you would think there would be no equal for a fighter of the year honour however, Nigerian-born Adesanya has also had an incredible year that would make you think otherwise.

Adesanya’s journey in the UFC has gone from a rising prospect, serious contender, interim champion and then to unified middleweight champion.  He’s exceeded all expectations and he’s looked damn good doing it too.  Out-thinking and out-striking everybody even against an elite striker like Robert Whittaker.  The way he knocked out Whittaker in two rounds at UFC 243 looked too easy and it’s an indication that his fellow peers have a lot of catching up to in terms of striking.

His movement and striking are so fluid and effortless.  It really shows he’s next level to everyone else, a bit like Anderson Silva when he was in his prime back in his heyday.  One of the reasons I love the sport of MMA is the constant improvement in fighting skills and Adesanya, for me, is that next level generation when it comes to striking.

‘The Last Stylebender’ had one of the most impressive resumes for 2019 which he’s carried on from his UFC 4-0 record he had in 2018.  Three big names he’s defeated this year.  Anderson Silva, Kelvin Gastelum and Robert Whittaker.  That’s one hell of a list.  All on the way to UFC gold.  Those three victories have been truly magnificent.

His victory over the legendary Silva was like a passing of the torch.  The war with Gastelum was a fight where we got to see Adesanya the warrior, as he displayed incredible heart to dig deep – he demonstrated champion mentality showing us how much he was willing to risk to win.  Believe me, I got chills from Adesanya saying “I’m ready to die” just before he put the performance of his life in the last round against Gastelum.  It was like a scene from a movie. 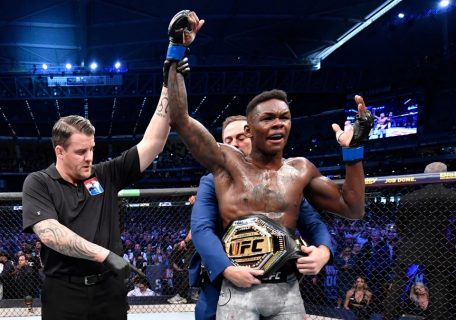 Then to go unify the belt against Whittaker, knocking out the former champion with such ease after people were doubting Adesanya against the calibre of a fighter in Whittaker especially after coming off such a war against Gastelum.  He proved them wrong indeed.

He’s now 7-0 in the promotion (18-0 overall), still undefeated and is now the UFC middleweight champion of the world.  All seven wins inside a year and a half.  Every win was bigger than the last culminating in what he had planned ever since he entered the UFC.  The man talked the talk and he’s delivered every single time.

The main difference between these two fighters is with Adesanya we all saw his success coming to some degree.  He set out for UFC gold, said what he was going to do from the start and has delivered.  Adesanya has exceeded all expectations.  For Masvidal, the Cuban-American has rebranded himself as ‘Street Jesus’.  A man who’s realised his full potential and finally reaping the rewards of a 16-year long career in professional MMA.  Back from the dead and captivating all of our fans on his journey to the top.

So, who do you think is the fighter of the year? I’ll leave it up to you.