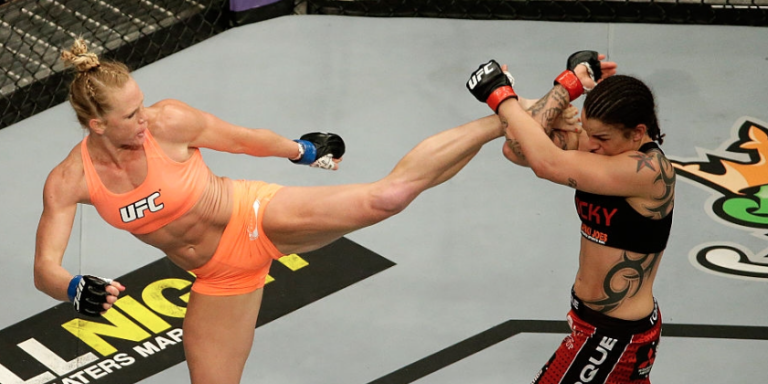 Holly Holm On Why She Was Chosen Over Miesha Tate: ‘I Don’t Really Care Too Much’

Yesterday the UFC surprised fans, media and fighters a-like by announcing that Holly Holm (9-0), not Miesha Tate, would be next in line for a title shot against the destroyer of all challengers and women bantamweight champion, Ronda Rousey (12-0).

The surprise announcement has led to fans coming up with different theories as to why the UFC chose Holly Holm, some have a little weight to them, others are straight up make believe. But Holm isn’t interested in any of them.

“Maybe it’s one of those things where they just want to test me out, kind of throw me out there,” Holm said while being interviews on FOX Sports 1’s America’s Pregame. “Maybe it’s because they really feel I’m ready. I don’t really care too much of the why. I just want to make the best of the situation.”

Previously, the UFC had implied Miesha Tate (17-5) would be the next in line after defeating Jessica Eye (11-3-1). However UFC president Dana White has stated that Holm was the “more intriguing” matchup, because Tate has already been finished twice by Rousey.

Despite fans outrage at the announcement they should remember that Holm is no joke. The 33-year old is a former three-division boxing champion and Ring female boxer of the year and is one of the most feared strikers in the division making her a far more accomplished standup fighter that anybody Ronda has faced before.

“I think she knows that in beating me that even says more about her stand up,” Holm said. “For a long time so many people were always just talking about her armbar. I think that she wanted to prove to them she has more than that, which she has done just that. So this is a big opportunity for her to really show people what she’s made of.”

To be a champion you need to have the mindset of a champion and Holly has proved she has a champions spirit. Many do not give her a chance against Ronda, taking bets on how far under a minute she will lose, but Holm is a former boxing champion, with experience like no other and brimming with confidence. Not only does she not play on being finished under a minute, she’s not thinking about losing at all.

“First of all, I’m gonna learn from all the other mistakes,” Holm said. “Every fighter has their own style and every style makes a different matchup. We’re gonna go in there with a game plan, but I always leave a little room for adjustments, because you never know how a fight is gonna go. My biggest thing is to just to stay focused the whole time. It’s easy to just kind of say, ‘Oh, we’re here, let’s just go’ and go forward with any kind of thinking. It’s a big mental game in there. I plan on being very composed.”