4 Weeks To Go Until Cage Warriors 70 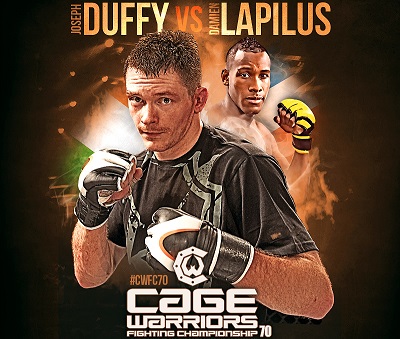 It is just 4 weeks to go until Cage Warriors hits Dublin, and only 4 weeks after Connor McGregor takes on Diego Brandao at UFC Fight Night 46! What a month the Irish fans have to look forward to!

Cage Warriors 70, is set to take place at the The Helix in the Irish capital of Dublin on the 16th of August.

Irish fans have a great night to look forward to as the unstoppable Cage Warriors promotion plays host to some huge match-ups including a main event between former CWFC Lightweight Champion Joseph Duffy and French rising star Damien Lapilus. This will be Cage Warriors 9th event of the year so far! Tickets are still available online via this link HERE, or by phoning (+353) 01 700 7000.

This will be Duffy’s first MMA appearance since October 2011. Meanwhile, 26 year old Duffy has been concentrating on his boxing career with 7 professional fights and 7 wins under his belt. Duffy was a contestant on UFC:TUF 12 and holds submission wins over current UFC stars Norman Parke and Conor McGregor.

“I can’t wait to put some new skills on show for one of the best promotions in the world, especially in front of a home crowd,” said Duffy. “It’s going to be a cracker.”


Lapilus is going to prove to be a very tough match for Duffy with his last 5 fights to his favour with just one loss in his last ten outings – which came at the hands of unbeaten Finnish star Teemu Packalen – Lapilus has carved out a reputation as one of Europe’s top prospects, having competed on highly-regarded events in France, Belgium, Finland and Sweden.

The clash with Duffy will be the fourth fight of 2014 for Lapilus, who has already picked up wins over Zyad Abada and Jean Francois Darmazil, as well as a draw with Daguir Imavov, so far this year.

When Cage Warriors caught up with Lapilus, he said:

“This will be a big challenge for me but I’m excited for it. Fighting on this event for Cage Warriors is a great opportunity which I’m really looking forward to.”

Elsewhere, after aborting a planned move to the lightweight division, Irish favourite Philip Mulpeter (7-4) returns to welterweight for what’s set to be an explosive clash with heavy-hitting Englishman Jake Bostwick (15-8-0-1nc), who’ll be searching for his ninth consecutive victory.

The Cage Warriors 70 current fight card is as below (more fights still to be announced).