A fighter must remain confident and calm under pressure at all times. In today’s episode of Across The Pond, you will meet a confident  fighter looking to continue his clim 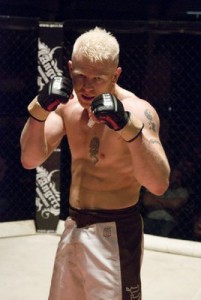 b up the Lightweight ladder at Cage Warriors 77.  A professional since April 2010 and representing Dragons Lair MMA under head coach Stu Pike, 37 year old Scott Clist owns a 10-2 record in twelve career bouts consisting of five submissions and five knockouts.

In his MMA debut, Scott knocked out Marc Allen in the second round. Then he earned a 45 second submission win over David Bedford followed by submission wins over Jimmy Millar and Gareth Pugh respectively. Clist picked up a second round knockout win over Milan Tomes. He also knocked out Kevin Reed. In 2013, Clist submitted Dan James in just 37 seconds. Then he knocked out Jamie Rogers in the second round. In 2015, Clist submitted Frenchman Thierno Dieng in the first round. At Cage Warriors 75 in London, he faced Lightweight veteran Brad Wheeler. Clist defeated Wheeler via TKO. He will now face Tim Wilde at Cage Warriors 77 on July 8th in London in what guarantees to be an all out slugfest between two exciting Lightweights Live on UFC Fight Pass. Good luck Scott!

Q and A with Scott-

What are your thoughts on your opponent Tim Wilde?

An interesting fact about me. Depends what you deem interesting. I write film scripts sometimes.
What is your favorite fight of all time? (yours or another person)
My favourite fight of mine has to be against Kev Reed. I lost the first round because Kev’s wrestling takedowns were awesome and I couldnt stop them. I learned so much from that fight. My eyes were opened to how much I was missing from my fight game so I went away and worked on loads of new stuff to add to my abilities
My favourite fight to watch is Hendo vs Shogun 1. What a war!

What attracted you to Dragons Lair MMA?

I was running my own gym, Revolution MMA , and I was spending too much time focusing on teaching and not on my own career. Dragonslair was my nearest competition gym and I had seen how good the fighters coming out of the gym were. I have known Brad Scott for years since he fought on an event of mine in 2008. I tried out for the same ultimate fighter as Brad. I made the last 16. Brad made it onto the show. In the car on the way home I was discussing with Stu Pike (Dragonslair head coach) about going over to train. When I shut my gym it was the only place I wanted to go.  Best move I ever made for my fight career. I wish I had gone there years ago