Unless you’ve been living on another planet – you know that the McGregor v Mayweather fight is now official for the 26th August in Las Vegas. Yes, that’s right flights to Vegas at that time just got a whole lot more expensive…by a long shot.

Before you start packing up your goods to sell on Facebook buy and sell groups to try and make what is a historic night in combat sports, take a second and enjoy the reactions from some fighters on Twitter.

First up, we got the announcement from the man of the hour, Conor McGregor.

THE FIGHT IS ON. pic.twitter.com/KhW0u3jRft

Mayweather also confirmed by releasing this video on his Instagram

Straight after this, his team mate James Gallagher was pretty quick to pile on with a healthy dollop of abuse for Mayweather.

The wife beating obviously being tied to the murky past of Mayweather whom I personally find to be a scumbag.

Conor followed up with this to Dana White as reported by Ariel Helwani.

White says McGregor told him today, "The McGregor clan has been taking over villages for 300 years and the Mayweather village is next."

Angela Hill wasn’t a fan of that though…

He stole that quote off a whiskey bottle. #ClanMcGregor #McGregorMayweather https://t.co/U575VcK4fo

It started to get a little bit ridiculous and Forest Griffin chimed in with his own tired take on the whole affair.

Scottish UFC star Steven Ray gave his opinion on the fight feels McGregor has a better chance than people think.


However, things got pretty interesting as Stipe Miocic, the UFC Heavyweight Champion threw down the gauntlet to Anthony Joshua and offered a fight on the card as co-main. Could we see Stipe take on Joshua?

Hey @anthonyfjoshua let's have a proper tussle and still have time for tea and crumpets before the main event! #MayweatherMcGregor

What do you think of the fight? Comment with your reaction and any predictions you may have. 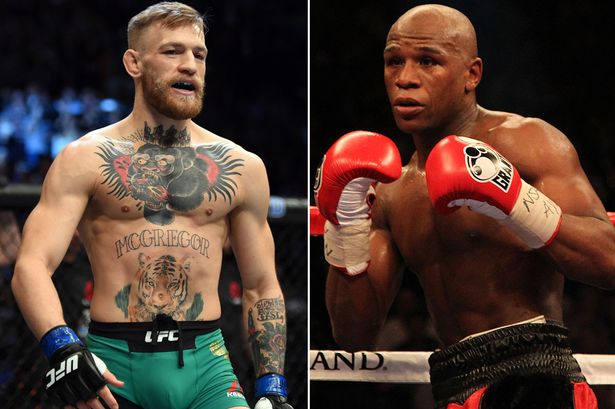