The short notice turnaround comes after Khamzat Chimaev was forced to pull out for a second time.

The short notice turnaround comes after Khamzat Chimaev was forced to pull out for a second time.

Just five days removed from his UFC 258 win over Dhiego Lima, Belal Muhammad has agreed to replace Khamzat Chimaev as Leon Edwards’ opponent for UFC Fight Night 187 on March 13th. The clash between Chimaev and Edwards has been cancelled three times since last December, most recently due to Chimaev suffering from long-term effects of COVID-19.

Leon Edwards has been adamant about remaining on the March 13th card, having not fought since July 2019 due to repeated fight cancellations as a result of COVID-19. Despite UFC president Dana White suggesting that a showdown with Colby Covington could be on the table, “Chaos” shut down these talks in a recent interview, stating that he is not in ‘the Leon Scott charity business.’ With the Covington fight dead, Belal Muhammad has stepped in to save the welterweight main event.

Edwards’ last outing saw him thoroughly beat Rafael Dos Anjos almost two years ago, seemingly putting him in line for a title shot before his momentum was stunted time and time again. It’s hard not to feel for “Rocky.” The pandemic has derailed his plans perhaps more so than any other UFC fighter, and despite sporting an eight-fight win streak, his not so fan-friendly style and lack of name-value leaves him repeatedly left out of big fight discussions in favour of more lucrative bouts. This fight with Belal Muhammad has big implications for the 170lb division, with Edwards (hopefully) getting the chance to silence all his critics and make himself undeniable for another crack at champion Kamaru Usman. However, if Muhammad can pull the upset against the #3 welterweight in the world, then a division that’s found itself in a stalemate will get a much-need shakeup. 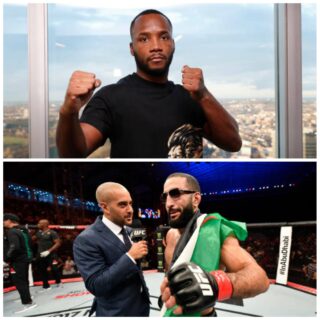